Today, I’m delighted to be interviewing Natasha Ngan for the release of her second YA novel, The Memory Keepers. Natasha’s debut, The Elites, came out a year ago to great reviews, establishing her as a fantastic new voice in UKYA fiction. I really enjoyed The Elites, and have been eagerly watching the letterbox for my copy of The Memory Keepers to arrive — it’s out today, so if you haven’t ordered it yet, it’s the perfect excuse for a shopping trip!

“No one can take your memories from you… can they?”

Seven is a thief with a difference – he steals downloadable memories from banks and memoriums to sell onto London’s black market, trading secrets and hidden pasts for a chance at a future of his own. He makes sure he keeps some special stuff back to ‘surf’ himself though – it’s the only real form of entertainment he can afford. But one night, as Seven is breaking into a private memorium in a wealthy part of London, he is caught in the act by one of its residents; Alba, the teenage daughter of London’s most famous criminal prosecutor. Instead of giving him away, Alba promises to keep Seven’s secret – as long as he allows her to go memory-surfing herself. In doing so, they discover a hidden memory about Seven’s past, revealing a shocking secret about Seven’s childhood, the government and a mysterious experiment known as The Memory Keepers…

Now Seven and Alba will have to race against time to unlock the maze of The Memory Keepers – but can they keep themselves out of harm’s way before the London Guard – and Alba’s father – catches up with them?

Hi Natasha! Can you start by telling us a little about The Memory Keepers?
Hi Kendra! Yes, so The Memory Keepers is a YA sci-fi story set in a futuristic London where memories are traded as commodities. It follows the journey of Seven, a boy who steals memories to sell on the black market and comes from the poorer half of London, South, and a girl called Alba, who is from privileged North and whose father is the city’s lead prosecutor and condemns criminals like Seven to the death penalty every day. It’s got adventure, new twists on familiar London settings, mystery, a little bit of comedy, and an unfurling romance at the heart of the book between Seven and Alba.
I love the concept of storing and reliving memories. It’s unique, yet believable at the same time — for some point in the future, anyway! Did anything in particular inspire the story?
Thank you! Actually the first inspiration for the story came during a holiday to Seville, Spain with my parents a couple of years ago. It was night, and we were wandering along the river, and I had one of those moments when you just wish you could bottle up what you were experiencing to relive it again and again. That was when the concept of a future where you were able to record memories came to me, and along with it this intriguing character called Seven who was so poor and lonely he stole other peoples memories to escape his own life. I wrote the first chapter – which is still very much the same – while waiting for our delayed flight home in the airport a few days later.
If you could surf someone else’s memories, whose would you choose?
My own, actually. Memories are so, so personal, and I often get these hard hits of nostalgia where I want to just spend the day reliving my past. I would revisit my childhood in Malaysia – an easier way to conquer homesickness than the expensive 13 hour flight between London and KL!

How did your experience of writing TMK compare to writing The Elites?
I was so much more aware of the readers this time round. Not in a suffocating way, or to the extent that I wasn’t writing as naturally or how I wanted anymore. Just in that I was very aware other people would be reading this novel, so I helped let that guide me when I stuck on plot developments or whether to introduce that fun new character I’d just conjured up or not. I wanted the story to be more streamlined than The Elites and not rest on coincidences.
Your world-building in The Elites was incredibly rich and detailed, and I loved the way your characters were unique with complex motivations. Having read the first few chapters of The Memory Keepers on the Hot Key website (here), I have no doubt your second book is the same! Which comes first for you when starting a new story: the world, plot, or characters?
I’m so glad you thought that Kendra! I hope you’ll feel the same with TMK. As I said in my answer to question 2, the concept is always the first thing that hits me about a story – just the basic, bare-bones idea, brimming with possibilities. Then it’s some of the characters and ideas for the setting, because I find for me those two things always come hand in hand. For example with TMK, Seven’s character is inextricably linked to the world in which he grew up in, and the same with Alba. Plot usually comes last, and it’s something that evolves naturally as I write. I’m not a planner – I only have these little flashes of scenes and ideas when I sit down to write the first draft. But as I progress from chapter to chapter, and my characters develop far beyond what they initially were, the plot slowly unfurls and reveals itself to me.
Both your novels have stunning covers. With your interest in fashion and design through your blog, Girl in the Lens, did you have any input into TMK‘s cover design?
I didn’t have much say in the cover, though partly because I trusted Hot Key completely after the amazing job they did with The Elites! I knew they were going for something similar with TMK and had already booked the same photographer, the wonderful Larry Rosant, to shoot a model playing Alba. I loved seeing it evolve from this single photograph to the complex and textured cover it is now.
Both The Elites and The Memory Keepers are futuristic, with elements of sci-fi and dystopia. Do you think you’ll ever be tempted to write in a different genre?
I adore sci-fi and fantasy – it’s just this wonderful thing to really disappear into a new world, to take everyday things and twist them, play around with them to create fresh but familiar settings and concepts. I think most of my stories will always have some elements of fantasy for this reason, but to differing degrees. My current WIP is actually an oriental-inspired fantasy, so it’s not at all futuristic, and I’ve also written an urban fantasy set in current-day Cambridge but with this dark, hidden aspect to our world most people are entirely unaware of. It’s currently on submission to publishers, so hopefully you can read it some day!
And finally, what’s next for you?
I’m thoroughly enjoying writing my oriental fantasy. It’s just so different in writing style and concept to anything I’ve done before, and is for a slightly older readership as it has some pretty dark elements and sexual themes. I hope to be done with it in a few months and then – fingers crossed – find a publisher for it!
Find The Memory Keepers:
Goodreads | Amazon | The Book Depository | Hive | Waterstones 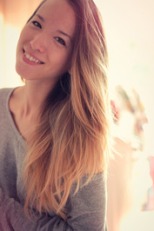 Natasha is a YA writer represented by Nicola Barr at Greene & Heaton. Since graduating from the University of Cambridge with a Geography degree in 2011, she has been working as a social media consultant and blogger, running top UK fashion blog Girl in the Lens with her photographer boyfriend, and has effectively swapped sleep for writing. Her novels THE ELITES and THE MEMORY KEEPERS are published by Hot Key Books.

Kendra Leighton is a YA author represented by Lutyens & Rubinstein Literary Agency. Glimpse, her debut novel, was inspired by Alfred Noyes’ poem ‘The Highwayman’.

Kendra has a BA in English Literature from Durham University and a PGCE from Cambridge. She taught English in China and Spain, before returning to the UK to teach in middle schools. She discovered her love for YA fiction while browsing in school libraries.

This entry was posted on September 4, 2014 by kendraleighton and tagged books, Interview, Kendra Leighton, Natasha Ngan, YA.