Pip Jones
Website, Twitter
Pip Jones is author of the Squishy McFluff series, which is published by Faber Children’s. The first book, Squishy McFluff: The Invisible Cat! won the inaugural Greenhouse Funny Prize in 2012, and was recommended by The Booktrust in its Best Books Guide 2014. The second Squishy title published in August 2014, the third is due to publish in February 2015. In addition, Pip has written a picture book, Daddy’s Sandwich, which will also be published by Faber, in May 2015. In a previous life, Pip wrote and edited features about glamorous things, such as fast cars and travel. Following the birth of her two children, in pinball-like succession, she began writing about pregnancy and babies (very little she doesn’t know about sleeplessness, colic, projectile vomit and the various consistencies of baby poo). If she wasn’t a children’s author, Pip would like to be an inventor, but no-one will let her go on Dragon’s Den because of the risk of sectioning. Pip is secretly in love with Benedict Cumberbatch (despite the fact he behaves like she doesn’t even EXIST)… and though writing is how she’d spend all of her time, she sometimes goes crackers from thinking in rhyme.

Can you see him? My kitten? Close your eyes tight

His fur is so soft and all silvery white

Imagine him quick! Have you imagined enough?

Oh, good, you can see him! It’s Squishy McFluff!

When Ava discovers an imaginary cat in the cabbage patch, she knows she’s found a new best friend. Together, Ava and Squishy McFluff get up to all kinds of mischief . . . (more)

“Hilarious and utterly delightful, this is a perfect match of text and illustration. Pip Jones’s writing is almost Seussical in its rhythm and rhyme, and Ella Okstad’s illustrations are delicious. A real treat.” — Robin Stevens, author of Murder Most Unladylike

Can you see him? My kitten? He has eyes big and round

His miaow is so sweet (but it makes not a sound!)

Imagine him quick! Have you imagined enough?

Oh, good, you can see him! It’s Squishy McFluff!

When Mum drags Ava to the supermarket, her invisible cat Squishy McFluff can’t resist coming along, with hilarious, chaotic and surprising results! (more)

“Younger readers will adore the mischief Ava and Squishy McFluff get up to.” — Luna’s Little Library

Oh yippee! Young Ava is very excited
To see Nana Dot (who’s rather short-sighted).
Nan’s fun! And she’s funny!
And if that’s not enough,
Can Ava’s Mad Nana SEE Squishy McFluff?
Ava and Squishy are up to their normal no-good when Dad whisks them off to Nana Dot’s – Mum’s got to go to the hospital to bring back Ava a baby sister! But Mad Nana Dot’s lost her glasses so can’t SEE Squishy McFluff . . . and a trip to the hairdresser’s, the post office, the fishmonger all end in adorable disaster.

Told in full colour throughout, this is the perfect stepping stone from picture books to older fiction. (more)

The festive fourth book in this fantastically successful new series for 4-6-year-old readers about Ava and her imaginary cat, in hilarious rhyming text with adorable illustrations. Told in full colour throughout, this is the perfect stepping stone from picture books to older fiction.

Ava and Squishy are back and this time their adorable chaos hits Christmas preparations for Mum, Dad, baby Roo, the local Christmas fete and much, much more . . . In her letter to Santa, Ava only has one wish. Will she get what her heart desires on Christmas day? (more)

“This series has so much appeal for young readers and it’s lovely to have a new Squishy story for Christmas.” — Lovereading4Kids 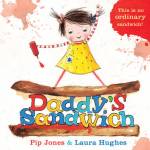 Daddy, would you like a sandwich, with all your favourite things…?

Join one little girl on her quest to make her father the perfect sandwich, whether he likes it or not… You’re in for a wicked surprise!

From Squishy McFluff author Pip Jones and bright new talent Laura Hughes, this is a brilliantly funny and charming picture book perfect for ages 3+ and for Fathers’ Day gifts. (more)