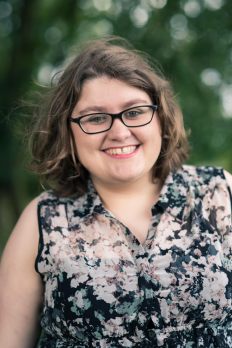 Lauren James was born in 1992, and graduated in 2014 from the University of Nottingham, UK, where she studied Chemistry and Physics.
Her first novel, The Next Together, a YA reincarnation romance, has been translated into five languages worldwide and is out now with Walker Books in the UK and Australia, and will also be published by Sky Pony Press in the USA. It was also longlisted for the Branford Boase Award, a prize given to recognise an outstanding novel by a first time writer. Lauren lives in the West Midlands.

THE NEXT TOGETHER by Lauren James

How many times can you lose the person you love?

Katherine and Matthew are destined to be born again and again, century after century. Each time, their presence changes history for the better, and each time, they fall hopelessly in love, only to be tragically separated.

Spanning the Crimean War, the Siege of Carlisle and the near-future of 2019 and 2039 they find themselves sacrificing their lives to save the world. But why do they keep coming back? What else must they achieve before they can be left to live and love in peace?

Maybe the next together will be different… (more)

ANOTHER TOGETHER: by Lauren James

Winter, 1940: there is a murderer on the loose at Bletchley Park, the headquarters of Britain’s most daring codebreaking operation against the Nazis. Can two young codebreakers Kitty and Matthew catch the killer?

This standalone short story can be enjoyed by new readers and existing fans of Lauren James’s The Next Together series.

Sixteen years ago, after a scandal that rocked the world, teenagers Katherine and Matthew vanished without a trace. Now Clove Sutcliffe is determined to find her long lost relatives. But where do you start looking for a couple who seem to have been reincarnated at every key moment in history? Who were Kate and Matt? Why were they born again and again? And who is the mysterious Ella, who keeps appearing at every turn in Clove’s investigation?

For Clove, there is a mystery to solve in the past and a love to find in the future.