I read all of Jane Austen’s novels when I was a student — even Northanger Abbey. Over the years I have done some erratic re-reading, and have seen various film and television adaptations. Then last year, on a whim, I decided to revisit Persuasion… and was genuinely taken by surprise: it seemed to me not simply disappointing but actively bad. So over the last few weeks I re-re-read it…

How, I hear you chorus, did I get on? Not very well, I’m afraid. 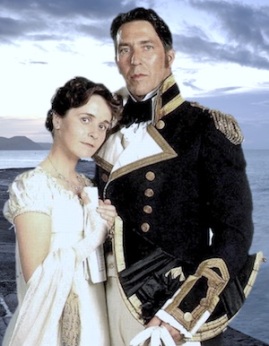 Amanda Root and Ciarán Hinds in the 1995 BBC adaptation

The plot can be simply (all too simply!) outlined. It is some years since Anne Elliot was arm-twisted into breaking off her engagement to a young navel officer, Frederick Wentworth. Now aged twenty-seven, with the bloom of her youth faded, she meets him again. She is still in love. He is horrified by the change in her appearance, and can’t forgive her earlier betrayal. Nevertheless, his feelings for her are not entirely dead…

Anne is a curiously opaque character: Austen attributes sensibilities to her, but never actually gets inside her head. Wentworth… well, if you cast aside Anne’s rose-tinted spectacles, he’s an ambitious, somewhat embittered individual who has made good, thanks to the Napoleonic wars, by leaving a trail of corpses floating on the high seas; and who, with the moolah safely stashed, has made a policy decision to marry the first half-decent prospect.

We know, anyway, that Anne and Wentworth will eventually sort it out. The question is how… and against what odds?

The nearest thing to a real impediment is Anne’s cousin, William Elliot, who takes a shine to her and who may, it seems, succeed in elbowing Wentworth aside. But he remains resolutely underdeveloped and, like most of the book’s secondary characters, exists less to develop the narrative than to underline Anne’s moral superiority to everybody else.

It all turns, in the end, on a lame plot device. Mrs Smith is an old schoolfriend of Anne’s, but has fallen on hard times. Anne pays her a couple of somewhat condescending visits (another demonstration of her moral superiority to her family, who have other plans) and Mrs Smith conveniently comes up with a letter. The manner in which it is produced demonstrates that at least Austen is aware of how badly this creaks:

This is full of papers belonging to… my husband; a small portion only of what I had to look over when I lost him. The letter I am looking for was one written by Mr Elliot to him before our marriage, and happened to be saved; why, one can hardly imagine. But he was careless and immethodical, like other men, about those things; and when I came to examine his papers, I found it with others still more trivial, from different people scattered here and there, while many letters and memorandums of real importance had been destroyed. Here it is; I would not burn it, because being even then very little satisfied with Mr Elliot, I was determined to preserve every document of former intimacy. I have now another motive for being glad that I can produce it.

And that’s Mrs Smith’s sole function. She hands over the convenient letter and disappears. Reading it, Anne learns that William Elliot is a Pretty Nasty Piece of Work. The path to Wentworth lies open.

Maybe this would be forgivable if the moment that the whole book has been building towards was worth the wait. But Austen botches it. Anne and Wentworth walk through Bath…

…and soon words enough had passed between them to decide their direction towards the comparatively quiet and retired gravel walk, where the power of conversation would make the present hour a blessing indeed, and prepare it for all the immortality which the happiest recollections of their own future lives could bestow. There they exchanged again those feelings and those promises which had once before seemed to secure everything, but which had been followed by so many, many years of division and estrangement. There they returned again into the past, more exquisitely happy, perhaps, in their re-union, than when it had been first projected; more tender, more tried, more fixed in a knowledge of each other’s character, truth, and attachment; more equal to act, more justified in acting.

No dialogue. No sense of real emotion. On and on, ploughing up the back story in a detached tone utterly unlike the intensity and immediacy of, say, the magical moment in Emma when Mr Knightly declares his feelings.

Somewhere, buried in Persuasion, there’s a cracking good story of ageing, of social constriction, of regret… of love lost and, mercifully, found. I ought to be in bits; actually, I’m bored and irritated. Although from an Eng. Lit. point of view there is, I suppose, much of interest, Persuasion seems to me, in the end, a flat, dry, unengaging read.

Donald Hounam grew up just outside Oxford. He toyed with medieval history at St Andrews University, and wrote a PhD thesis on apocalyptic beliefs in the early Crusades. He threw paint around at the Ruskin School of Drawing in Oxford, then found himself in Dublin where he threw more paint around and reviewed films until his flatmate set the building alight one Christmas, whereupon he scuttled back to England and started making up stories.

He is guilty of two novels featuring forensic sorcerer Frank Sampson: Gifted (2015, published in the US, 2017, as A Dangerous Magic) and Pariah (2016).