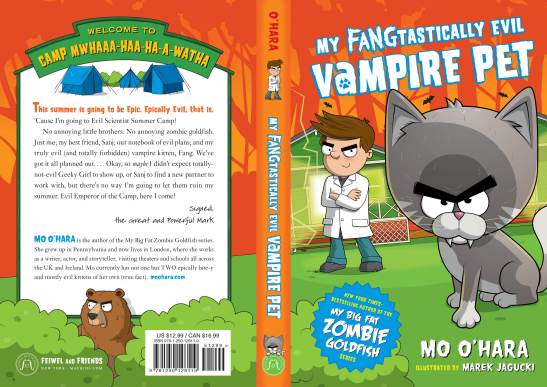 One year 4 reading group at Ruardean Church of England Primary School are such fans of Mo O’Hara, that when they heard her new book was coming out, they wanted to interview her. They loved reading My Fangtastically Evil Vampire Pet as a group and came up with the questions together.

What or who inspired you to become a writer? 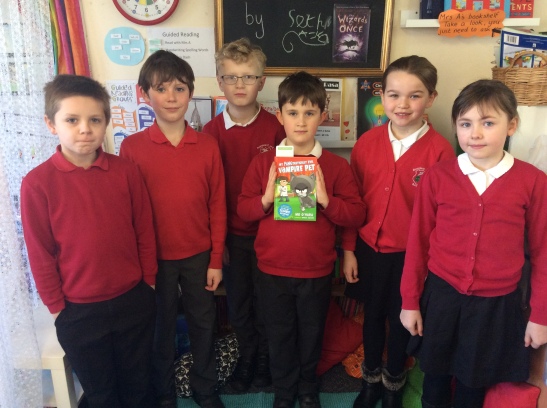 Hi. Thanks for coming up with these questions guys. These are great. So, what inspired me to be a writer? Hmmm? Great funny writers like Roald Dahl inspired me as a kid but I didn’t think I could be a writer for a long time. My spelling and my handwriting are both terrible and my teachers at school let me know that I because of that I couldn’t really be a writer. I grew up and became and actor but always kept writing on the side. It was many years later that I got the confidence to be a writer. I credit my comedy writing partner and my friends at SCBWI for getting me to trust that I could be a writer.

We love the humour in your novels, we know that you are originally from America. Do you see your humour as British, or American?

I have always liked British humour. Monty Python and Douglas Adams especially but I think my dialogue definitely has an American feel. I’m probably  a mash up of both.

What is your favourite joke or funny moment in My Fangtasically Evil Vampire Pet?

I love the bit where Mark pretends to be fighting a snake and he is actually wresting a hotdog from his pet kitten Fang. 😉

One of the fabulous things about your books is that they get reluctant readers into reading. Why do you think your writing has such appeal to this group?

That appeal is not accidental. I wanted to reach out to reluctant readers because my son was one of them.  I pictured my son and his friends reading and tried to throw in enough to keep them interested.  Macmillan was also great at using the layout of the book to appeal to a reluctant reader. There is a lot of white space, there are tonnes of illustrations and they added things like the flip book pictures. Also, I always  made the chapters short and ended on a cliffhanger.

You can’t talk about Mark without talking about his little brother and his goldfish! When you were thinking about topics to write about for children, what made you think of zombies and vampires?

I think that I’ve always love zombies and vampires so I just assume most kids will like them. 😊 I also think that it’s the voice of Tom or now of Mark that gets the kids into the books. They like and connect to the person telling the story so they want to keep hearing the story. It also helps with the humour.

And how did you come up with a vampire kitten?

I have two vampire kittens of my own. I’ll attach pictures. They inspired me to write about Fang. 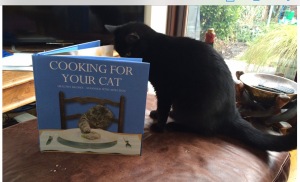 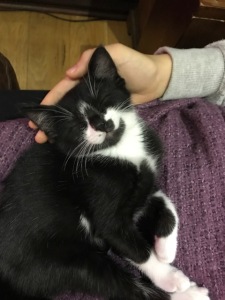 I love that we now have a spin-off book starring, Mark, who is basically the bad guy from the ‘My Big Fat Zombie Goldfish’ series. What made you want to tell us more about Mark?

I’ve always had a soft spot for Mark. And he was only ever ‘mostly evil.’  He would stop his world domination plan if it would hurt Sami or Fang and over the course of the ZG books he evolved more of a heart.  I also wanted to explore the fact that a bully is not always stuck as a bully.  He is not irredeemable. If you put Mark in a situation where he needed to save someone he cared about or do the right thing I wondered if he would do it.  I asked myself the ‘What If?’ question, ‘What  if Mark had the opportunity to be the least evil person in the room? ‘

Who did you prefer writing about, Mark or Tom? Is it more fun to write about a villain or a hero?

I love writing in Tom’s voice. It just felt really natural but I must admit it’s fun to write someone who has an evil glint in his eye. I like that Mark is more conflicted. He sooo wants to be fantastic at being evil but he is actually learning if he can be a friend.

The illustrations are great, do you have a favourite?

I LOVE Marek Jagucki’s illustration. They crack me up everyt ime I read the books.  We actually have a running joke in all the ZG books and now in the first FANGtastic Vampire Pet book.  There is a random quizzical bird that Marek puts somewhere in the illustrations. He did it in the first book and now keeps adding one into each book. In this book I Love the character of Igor and I love the tower of forest animals and of course the bear!

Why set your story in summer camp? Did you go to Summer camp as a child in America? And if so, do you have any good summer camp stories?

No, I never went to Summer Camp but I watched a lot of movies about it. 😊 I went to Girl Scout camp once and based the raccoons that are in this book on the racoons there that ate ALL our food one day.

What pets do you have?

Growing up I had several goldfish and one cat.  His name was Super. I now have my two cats: Echo who is four and Forest, who is six months old.

Which would you rather be, a zombie or a vampire?

Vampire- definitely. I talk too much to be a zombie. 😊

If you could bring someone or something back from the dead who or what would it be and why?

I don’t think I would want to do that. I would be freaked out that there would be some kind of cosmic consequences if I did that. I’ve seen too many Sci Fi movies and read too many books where that kind of thing goes wrong.

Is Bob allergic to cats?

Yes, he is. That’s why he sneezes when Fang is in Mark’s pocket.

Did the Marshmallow part make you hungry?

I am always hungry for marshmellows. I LOVE them, especially when camping. 😊

Why is Geeky Girl called that and not by her real name?

Geeky Girl appears in book three of ZG. She uses Geeky Girl as a code name as her computer hacker persona.  She hates and own first name and never uses it.  She yells at Pradeep for saying it in the books.  In the third book in the Vampire Pet series we’ll meet more of her family and hear more about her name and her past too.

Thanks so much for all the questions. They are fin-tastic!

I am a writer. My first book, Angel's Fury was published by Egmont in July 2011. My second book, The Weight of Souls, by Strange Chemistry in August 2013. Phoenix Rising and Phoenix Burning by Stripes, Wavefunction by Telos and Windrunner's Daughter by Xist in 2016. I have short stories in two anthologies. More information on my website www.bryonypearce.co.uk
View all posts by bryonypearce →

This entry was posted on March 9, 2018 by bryonypearce.