The issue of being “on brand”

As far as you’re concerned, my writing history looks like this: 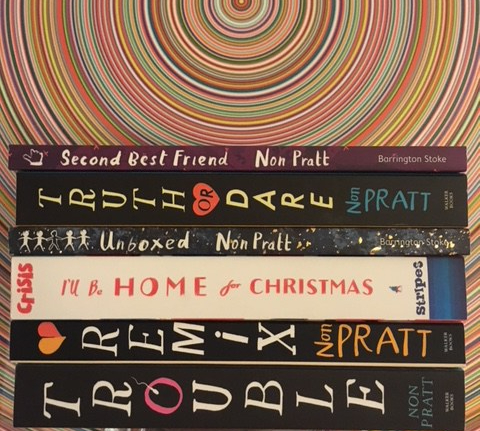 Authors often talk about the projects in our past. Other yet-to-be published writers can draw reassurance from knowing we didn’t just get it right straight off.

My writing past is long and littered with affectionately abandoned projects. There’s the half-started stories written when I was (much) young(er), of the spoiled pony-owner who hated having to let visiting cousins ride her pony, a girl bassist in a band falling for the skater dude singer, the girl who had demon voices urging her to sacrifice one of her classmates… and the three bottom-drawer projects I wrote while looking for my voice.

These are the projects that taught me how to write: how to finish a book; how to plot; the difference between my third- and first-person voice; how much I love a multiple narrative. I grew up and I grew better and I got published.

Now I’m published the only books that count are the ones other people can read. But this post isn’t about those books – it’s about the ghosts of the ones that haunt the gaps between those published books, the stories I would have written if I didn’t have a publisher.

These are the rejections that come after that first yes – the ones I’m wary of discussing, because that would dispel the illusion that I’m now a successful author.

That’s crap though, obviously. My successes are built on the foundations of my failures in the same way Trouble was built off the back of those three never-to-be-published bottom-drawer novels. Furthermore, pretending that once someone has a publishing deal all their ideas are golden is unhelpful and does nothing for those looking to enter the game.

The fact of the matter is that, for me, editorial rejection doesn’t stop coming. Ever.

Here’s the story in a simple picture: 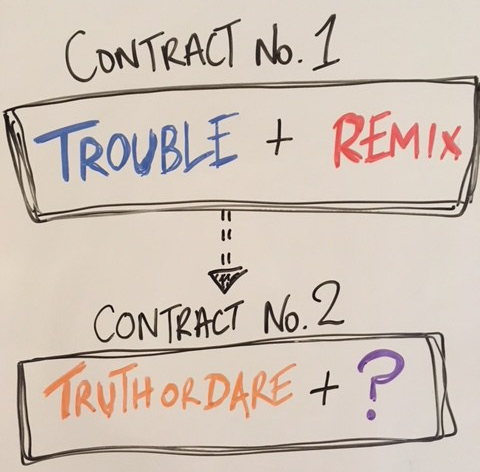 Only that’s not all the story. Between my first contract and my second, I developed two different ideas, the kind I love the best, that left to my own devices would have been written by now.

BUT writing is no longer my hobby; it’s my job. Jobs are not about being left to your own devices. My editors didn’t like my ideas. One was too gritty. One was way off-brand. With a readership comes expectations and it’s part (not all) of an author’s job to take those expectations into consideration. My editors felt that a Non Pratt books can’t be too bleak (as my first idea was) nor should it be way outside the contemporary zone (if contemporary is Zone 1, idea 2 was up in the Shetland Isles).

So I came up with Truth or Dare. Contract secured. No one needed proof that I could come up with a good idea for the book marked ‘?’ – we’d cross that bridge when we came to it.

A bridge we reached in September 2016… and we’ve yet to cross. 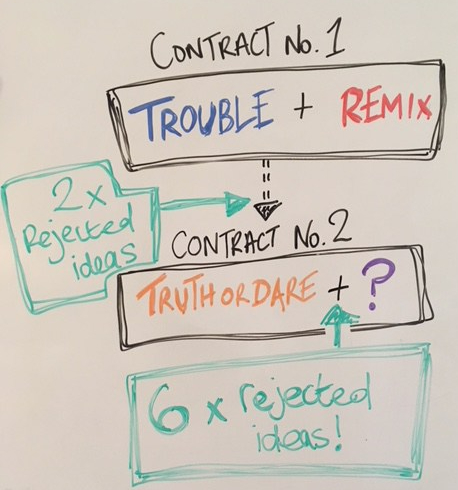 Here are some of the reasons why my ideas for ‘?’ have been rejected:

If you’re wondering how I’ve farted away so much time, it’s because:

So many ideas I’ve loved and lost. Notes scribbled in a book, Post-its on my wall, pitches in my Sent Items folder… and nothing more.

It’s difficult not to get dispirited when you think an idea’s fab and it gets a lukewarm reception. I’m easily dissuaded from the brilliance of my own imagination and the shininess of every idea I had for ‘?’ is tarnished the second I see someone’s brows knit and a question form in their mind. (Oh, external validation, my sweet nemesis.) 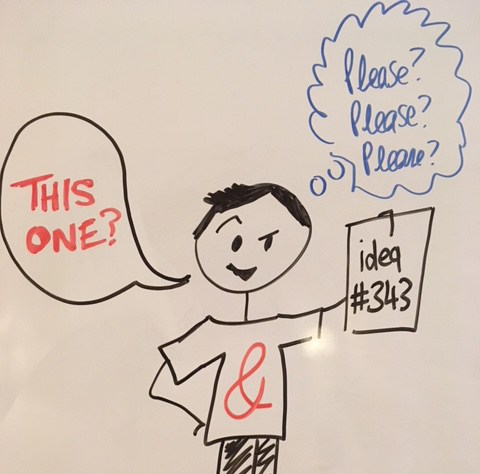 But this post isn’t a sympathy-grab. I don’t write to get published; I’m published so I get to write. Being paid to do this is my choice, because it’s the best way to justify how much time I want to spend making stuff up.

So here’s what the last 17 months of failure has taught me:

And the most important thing it’s taught me? That I don’t have to do this, that I can walk away if I want. Being an author is like any other job. You can quit. (Probably not while you’re under contract, though Non…)

Once you know you don’t have to do this, it becomes a choice.

For now, I choose this. This week I’m pitching my best idea yet for ‘?’ and you know what? I think this one I’m actually going to write.

This entry was posted on February 19, 2018 by Non and tagged drafting, Non Pratt, pitching, Publishing, Writing.