Shortly before I left school, aged eighteen, the headmaster gave a talk about the perils of the Big Wide World that we were about to enter. He had two important pieces of advice to impart: never wear brown shoes with a blue suit; and don’t get a girl up the duff.

This was the second piece of useful sexual advice that I had received at Abingdon School. The first, delivered several years previously, had been more detailed and more mystifying, but boiled down to a similarly pithy commandment: keep your hands — and, for that matter, anybody else’s — off the little chappie.

Rereading, my first thought was: well, I wasn’t really planning on that; but it’s what teenage boys do, frequently and intently. And it’s certainly true that many topics that were once taboo no longer are: homosexuality, gender-transition (have I got the right term?), extreme dismemberment, Jesus in a tutu… 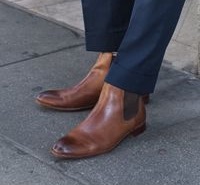 My book is mainly, I think, about loss, vulnerability and exploitation; and my central character’s sexual behaviour is just a detail — emphatically not what the book is about. But it feels like an important aspect of how the character is with himself. So far I haven’t shown the full text to the grown-ups. Maybe they’ll be OK with it. But I realise that I am doubtful about whether I’ll get the green light on this.

I have never seen myself as a taboo-breaking writer. I’m male, straight, middle class, white, university educated: what would I know about taboo breaking? The world was all laid out for me on a plate. I didn’t have to question my sexuality, my racial or class identity… It was all taken as given — as the norm.

But is it actually acceptable for a writer the wrong side of sixty to have the temerity to address teenage sexuality, however circumspectly? I hope so. I was, after all, a teenager once myself, even if a conspicuously confused and unsuccessful one.

Put simply: as a spectacularly undiverse author, would I be offending against taboo if I were to write about, say, gender reassignment, autism or inner city racial tensions? I don’t want to revisit the dust storm raised by Lionel Shriver’s remarks on cultural appropriation; but I am acutely aware that, as a privileged writer, it behoves me to write with caution and sympathy… and to do my research.

And then there are the taboos we set ourselves. I am of a shy and retiring disposition, and my sense of how YA writers think collectively is largely shaped by what I read on Twitter and Facebook; and I see a consensus. We are self-consciously ‘progressive’ on issues of sexuality, race and gender. I can’t, for example, imagine that any of the writers I follow on social media would write a novel in which a teenage boy, convinced that he was, in fact, a girl, came out as transgender to his parents… and they talked him out of it and, with hindsight, he realised that they had been right.

As far as I and my peer group are concerned, it seems axiomatic: parents who questioned a child’s insistence that he or she was gay or mis-gendered would be wrong. A story about such a conflict must end with the child coming out or making the change.

I’m not taking a position: I lack that sort of moral conviction. I am merely pointing out that we — the supposed taboo-breakers — have our own taboos. They are self-imposed. And they are intense.

But then the whole point about taboos is, I suppose, that the exclusions they propose are one of the ways in which we define ourselves. Discuss.

One final thought. There’s also the question of where you attempt to break taboos. For the tagline on the back cover of my first YA novel,Gifted, I wanted “Just what the world needed: another fucking teenage wizard.” The grownups told me to cut a word, on the grounds that bookshops and libraries would regard it as — yes — taboo.

And for an intelligent critique, by Foz Meadows, see: https://fozmeadows.wordpress.com/2016/09/13/identity-narrative-a-response-to-lionel-shriver/

Donald Hounam grew up just outside Oxford. He toyed with medieval history at St Andrews University, and wrote a PhD thesis on apocalyptic beliefs in the early Crusades. He threw paint around at the Ruskin School of Drawing in Oxford, then found himself in Dublin where he threw more paint around and reviewed films until his flatmate set the building alight one Christmas, whereupon he scuttled back to England and started making up stories.