MY FAVOURITE POETRY by Zoë Marriott

The intended title for today’s post was actually supposed to be ‘My Favourite Poem’, but asking me to pick out a single piece of poetry and plant a flag in it seems unbearably cruel. In fact, it’s a bit like asking me to pick a favourite book. It’s just not going to happen. The best I can ever whittle it down to is probably my top three, and that changes – at the very least! – from hour to hour.

I started out with poetry, you see. Long before I’d gained the ability to actually finish a story (no matter how brief) I was fiendishly scribbling down poetry, sometimes at a rate of two or three new pieces a day. I have notebooks full of poems dating back to when I first gained permission from my teachers to use joined up writing. Some of it isn’t even that bad, if I do say so myself.

As I became more of a storyteller, though, wedded to the form of novels, my own ability to write poems became inextricably linked to the development, history and emotions of my characters. So poems or songs show up in many of my books, but I don’t seem to have the ability to express my own feelings, directly, through poetry anymore.

It was a sad day for me when I realised this transformation had taken place. As a result, I’ve become an even bigger geek about other people’s poetry, and anyone who follows me on Twitter or Facebook will know that I randomly fling quotes out there the way that Tony Stark tosses withering one-liners (we all have our super powers, I suppose).

Anyway, since Today’s Top Three is best I’ve got to offer – let’s get on with it!

First up is ‘Marcia ‘by Ruth Stone, a piece offered to me as a comfort by a friend after I had been talking to her about my complex and often adversarial relationship with my own mother.

This distance between us

which stretches and shrinks,

as the breathing trees,

lift and sigh with the weight of the world,

clasped by the molten center.

How in this braided pattern

we dance in and out

of our bodies which dance in and out

themselves, never one thing or the other.

What is this that we are

this rocking tide that we remember

imperfectly in our separate skins.

as we love one another,

how to escape the unyielding law of the universe,

the self and the Other;

That the self, sometimes

in sleep, admits the loss, the grief, and accepts

the burden of loneliness; embracing

what we will not admit we long for

this separation of mother and daughter.

The way this poem ebbs and flows feels incredibly truthful. Its rhythm and the emotiononal dance it depicts is something I’ve tried to capture often in my own writing about complicated family relationships. It embodies the way that poems can often somehow find way to express something that can’t be said any other way, and how comforting that can be if you, yourself, have struggled to put into words those tangled feelings.

Next comes a poem that I happened across while searching the internet for pithy quotes for the back of my new business cards. Instead I found a breathtaking affirmation which I’m still figuring out how to have tattooed somewhere on my body, just so that I never forget it – ‘You Learn’ by Jorge Luis Borges:

And you begin to learn that kisses aren’t contracts
And presents aren’t promises,
And you begin to accept your defeats
With your head up and your eyes open
With the grace of a woman, not the grief of a child,

And you learn to build all your roads on today
Because tomorrow’s ground is too uncertain for plans
And futures have a way of falling down in mid-flight.

After a while you learn…
That even sunshine burns if you get too much.
So you plant your garden and decorate your own soul,
Instead of waiting for someone to bring you flowers.

With every good-bye you learn.

How terrifyingly real, and modern, and topical is that? And it was written by a middle-aged Argentinian man before I was born, which just goes to show that poetry – the best poetry anyway – keeps on being like a sword-thrust right to the heart no matter how much time passes or the world changes.

And finally, I have to include a piece by my first and most enduring poetry-husband, W.B. Yeats. A volume of his works, chosen and introduced by the great Seamus Heaney (and filled by me with dozens of postcards, bookmarks, and scribbled-on Post Its) was one of the very first poetry books I bought for myself, and always lives in my workspace, wherever I chose to make it. 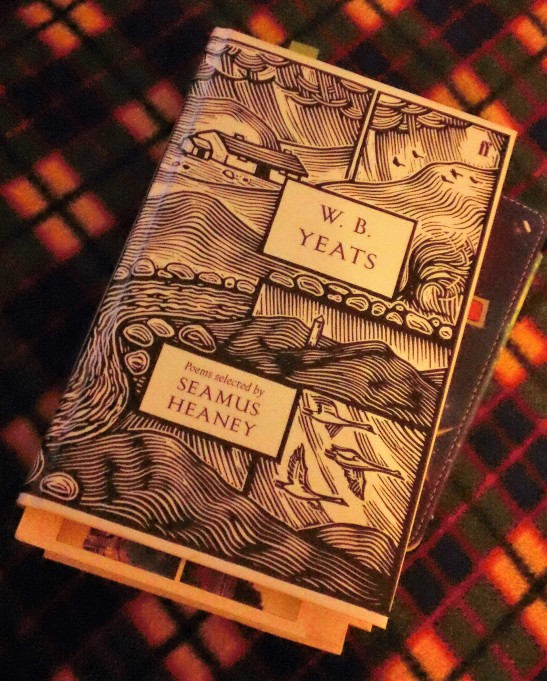 I’ve changed my mind on which of his poems I love most more times than Marvel Studios have changed their mind about giving us a female headlined superhero movie. Perhaps ‘The Second Coming’ – Turning and turning in the widening gyre/The Falcon cannot hear the falconer;/Things fall apart; the centre cannot hold or ‘When You are old’ – But one man loved the pilgrim soul in you,/And loved the sorrows of your changing face – or even ‘Brown Penny’ – O love is the crooked thing,/There is nobody wise enough/to find out all that is in it,/for he would be thinking of love/Till the stars had run away/And shadows eaten the moon – but for today I present a poem that long ago gave me the spark of inspiration for an as-yet unwritten novel. ‘The Heart of the Woman’.

O what to me the little room
That was brimmed up with prayer and rest;
He bade me out into the gloom,
And my breast lies upon his breast.

O what to me my mother’s care,
The house where I was safe and warm;
The shadowy blossom of my hair
Will hide us from the bitter storm.

O hiding hair and dewy eyes,
I am no more with life and death,
My heart upon his warm heart lies,
My breath is mixed into his breath.

‘The shadowy blossom of my hair…’ hits me right in the heart every time. Such an unforgettably beautiful image, so simply expressed. Reading this for the first time confirmed Yeats as my true poetry-love.

Who are your true poetry loves? Toss them in the comments for all to enjoy!

(Fingers crossed I get to write that book one day!)

YA novelist Zoë Marriott lives on the bleak and windy East coast of Britain, in a house crowded with books, cats, and an eccentric sprocker named Finn (also known as the Devil Hound). Her folklore and fairytale inspired fantasy novels are critically acclaimed and have been nominated for many awards, even winning a few, including a USBBY Outstanding International Book listing for The Swan Kingdom and a Junior Library Guild Selection and the prestigious Sasakawa Prize for Shadows on the Moon. Her latest novel, Barefoot on the Wind, is a Feminist retelling of Beauty and the Beast set in fairytale Japan. Zoë is proud to be represented by Nancy Miles of the Miles Stott Children’s Literacy Agency.

2 comments on “MY FAVOURITE POETRY by Zoë Marriott”

This entry was posted on September 12, 2016 by zdmarriott and tagged inspiration, poems, poetry, Writing, Zoe Marriott.