View From A Desk

The first thing you should know is, don’t believe a word she tells you.

She’ll say she likes to be at her desk at nine – and maybe she likes it but I can tell you now, that doesn’t mean she does it. Half nine on a good day. Occasionally I can even hear the beginnings of Women’s Hour before she plonks her ass down on my chair.

Also, she’ll say she always works at her desk in her study. That’s true in the sense that she isn’t one of these writers who takes her laptop to bed, and to be fair she never sits at me in anything remotely resembling deshabillée, but she sometimes cheats on me with the kitchen table. She says it’s because the kitchen is warmer and being an impoverished writer she has to think of these things. I think she just likes its proximity to the kettle. This year she decamped to the kitchen for the whole winter and only returned to me in May.

She’s a tea fiend but to be fair she doesn’t cover me with cup rings and spillages. I’m not under any illusions about that being concern for me – she’s just terrified of destroying her precious MacBook. So the tea lives on the windowsill, which is handily just beside me. There’s a view too – I mean, I don’t get to see it: she has me facing a wall; but she looks out sometimes when inspiration fails. 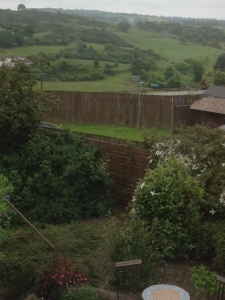 I don’t get to see this

Recently she covered part of me with a large plastic placemat thing; it’s from IKEA – bit infra dig; I’m from an antique shop – but it’s supposed to protect me. I’m quite old and I sag a bit in the middle: I have been pre-owned, and to be fair, when I think of how I used to be treated, I have to admit she’s not the worst.

You’ll look at the photo and assume she tidied me specially but actually she does keep me reasonably neat. She doesn’t like mess, and she always tidies up at the end of each day. Still, I’m not what you’d call minimalist either: apart from notebooks and pens and books, there are always a few gewgaws sitting about. (I’m over 100 years old; I use words like gewgaw.)

Tidy but not freakishly so.

Sometimes she looks at me and sighs and says I’m past my best, and I know she fantasises about an Edwardian desk with lots of drawers and fancy slidey-out bits for her pens, but I’ve seen what she earns: I’m safe for the foreseeable.

6 comments on “View From A Desk”

This entry was posted on June 16, 2016 by sheenawriter68 and tagged writing life.