Firstly, I just wanted to say that I’ve now taken over as an admin of this blog, and I’m so pleased to be part of such a great team. Hi everyone! Okay, onto the post.

It evolves as the book goes on – in fact, sometimes I’ve fixed a plothole in the book by moving around a few songs, or deleting one completely. Songs represent moods and character developments, and listening to a playlist is like an audio version of reading a book – it’s the unfiltered ups and downs and swings and roundabouts. It’s the essential feeling of a book, distilled.

It’s also the easiest way to slip into writing. Playing the first song in a book’s playlist, wherever you are, is a kind of instant connection to the story. It sets you up perfectly to begin writing without having to reread anything to get yourself in the right frame of mind.

Good music also has a way of tricking you into delusional grandeur – you can make believe that you’re writing The Illiad, instead of the mediocre first draft of a YA novel. It’s exactly the kind of belief you need to force yourself to see writing it through to the end of the book.

So here’s the soundtrack of the last four years of my life.

Playlist for The Next Together  (All links lead to Spotify)

I haven’t listened to this playlist since mid-2015 – by the time I’d finished work on TNT, I was so sick of these songs that I couldn’t play it again. But I listened to it while writing this blog post, and it was an instant transition back into being 21 year-old me: a nervous, adrift debut author with no idea how people would react to this hefty thing I was writing.

The song that never fails to make me cry when it comes up on shuffle is Dear River. It just gets to me. It sums up the way my characters feel about each other so well that I always take it like a blow to the heart. It’s impossible to underestimate the power of good music.

Playlist for Another Together

This next playlist is for my novella about Kate and Matt, ANOTHER TOGETHER, which comes out in eBook on June 2nd. The story is set during World War II, so I listened to a lot of 40s-era music while I was writing to get me in the mood.

There’s also some modern songs, which I heard when I was writing, and just made me think of this story. Sometimes it’s hard to isolate just why a song makes you think of a story – but when you can work it out, it can give you a lot of insight into your characters, I find. (I feel like I’m talking nonsense now, but this is a legit thing! Promise!)

I’m less sick of this list – it was a much shorter writing process, so I didn’t listen to them an indecent number of times.

Playlist for The Last Beginning 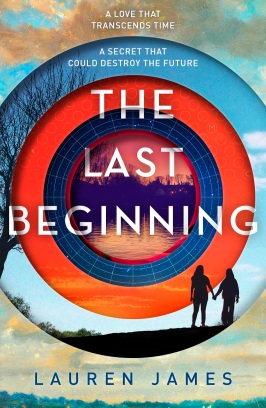 Okay, this one, for my second novel THE LAST BEGINNING is very, very long. I’m going to cut it down eventually, because it’s just plain greedy at the moment – but as I’m still working on this book, I’m not ready to let go just yet. I’m not going to give you lyrics, because that might be a bit of a spoiler – you’ll have to work them out for yourself!

“She’s electric, she’s in a family full of eccentrics, she’s done things I never expected. And I need more time.”

Lauren James was born in 1992, and graduated in 2014 from the University of Nottingham, UK, where she studied Chemistry and Physics.
Her first novel, The Next Together, a YA reincarnation romance, has been translated into five languages worldwide and is out now with Walker Books in the UK and Australia, and will also be published by Sky Pony Press in the USA. It was also longlisted for the Branford Boase Award, a prize given to recognise an outstanding novel by a first time writer. Lauren lives in the West Midlands.

Lauren James is the twice Carnegie-nominated British author of many Young Adult novels, including The Reckless Afterlife of Harriet Stoker, The Loneliest Girl in the Universe and The Quiet at the End of the World. She is also a Creative Writing lecturer, freelance editor, screenwriter, and the founder of the Climate Fiction Writers League. Her upcoming release is Green Rising, a climate change thriller. Her books have sold over a hundred thousand copies worldwide, been translated into five languages and shortlisted for the YA Book Prize and STEAM Children’s Book Award. Her other novels include The Next Together series, the dyslexia-friendly novella series The Watchmaker and the Duke and serialised online novel An Unauthorised Fan Treatise. She was born in 1992, and has a Masters degree from the University of Nottingham, UK, where she studied Chemistry and Physics. Lauren is a passionate advocate of STEM further education, and many of her books feature female scientists in prominent roles. She sold the rights to her first novel when she was 21, whilst she was still at university. Her writing has been described as ‘gripping romantic sci-fi’ by the Wall Street Journal and ‘a strange, witty, compulsively unpredictable read which blows most of its new YA-suspense brethren out of the water’ by Entertainment Weekly. The Last Beginning was named one of the best LGBT-inclusive works for young adults by the Independent. Lauren lives in the West Midlands and is an Arts Council grant recipient. She has written articles for numerous publications, including the Guardian, Buzzfeed, Den of Geek, The Toast, and the Children’s Writers and Artist’s Yearbook 2021. She teaches creative writing for Coventry University, WriteMentor, and Writing West Midlands, providing creative writing courses to children through the Spark Young Writers programme.
View all posts by Lauren James →

4 comments on “Plotting via playlists”