Show Not Tell by Elli Woollard

I started this post by writing a long article about how picture book authors need to use words sparingly, and let the pictures do a lot of the talking. About how picture book authors need to literally show, not tell. Then 500 words into the article, I stopped. What was I doing? Because you don’t need words to convey that something a little bit disastrous could be about to happen at the start of a story;

A Bit Lost, by Chris Haughton

that the city is a bleak and lonely place;

that a small boy is desperate for a friend;

How to Catch a Star, by Oliver Jeffers

that snow is wonderful and magical and exciting and just waiting to be explored; 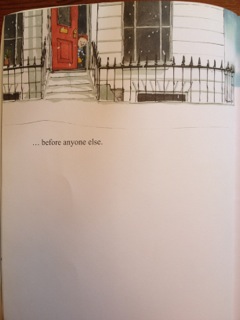 that with a couple of friends and huge dollop of imagination you can have the best fun ever;

On Sudden Hill, by Linda Sarah and Benji Davies

that nature brings life to the wilderness;

The Promise, by Nicola Davies and Laura Carline

or that even though one book has come to an end, a new story is about to begin.

The Crocodile Who Didn’t Like Water, by Gemma Merino

Words are magical. Words are musical, rhythmical, wonderful things. But there are some things that pictures can convey with so much more immediacy. So my first advice to anyone writing a picture book is to shut up and listen to what an illustration could be saying. Your books will be much better for it.

Elli Woollard
Website, Twitter
At the age of four Elli wrote her first picture book, involving her best friend, a tricycle accident, blood everywhere, and the author emerging as the hero. Several years later she completed an MA in social anthropology, moved out to Thailand, taught herself the language, and has since worked variously as a Thai to English translator, a copywriter for a domestic appliance insurance firm (about as interesting as it sounds) and an assistant editor in academic publishing. She now lives in London where she combines writing with freelance translation work, looking after her four children, butchering nice music on the piano and being dictated to by her deranged cat.

2 comments on “Show Not Tell by Elli Woollard”