What colour were Belfast trams in 1916? How much did a doctor earn in 1919? How popular were heliotropes in the early twentieth-century garden?

I do. I’m a geek. I love studying. Writing historical fiction gives free rein to this. I can spend days reading books, making notes, and putting off the dreaded moment of Actually Starting To Write. Which is the best bit, of course, but the scariest bit too.

All of the above were things I needed to find out for recent short story projects. I set myself a task – six stories in six months, and I hoped that out of one of those stories might come the idea for a novel. I’m working on story six, and yes, last week I bought a large notebook for research notes. In fact, it’s more than a notebook. It calls itself a ‘project book’. There are 200 pages. There are coloured section dividers, and – this is the best bit – these are moveable, so you can have some sections longer than others. Told you I was a geek. 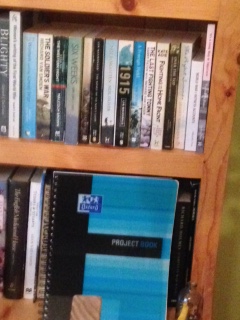 Facts. So much of what writers do is so nebulous, so – strange – that it’s comforting to have a list of facts to find out. But facts aren’t the same as truth.

I’ve always known that. But it was brought home forcefully at a school visit this week. Some pupils had devised a short play about the events leading to the 1916 Easter Rising. Because my recent novel Name Upon Name was set in that period, I was brought in as an adviser.

The pupils had worked hard to prepare their play, about the collapse of a Dublin tenement building in 1913. They’d included convincing details and I was impressed that for the most part they’d managed to write speeches that sounded neither too modern in their idiom, nor inaccessibly old-fashioned. This is always a challenge in historical fiction.

I did question the scene where the tenement dweller talked about her washing machine. ‘There’s no way she’d have had a washing machine in 1913,’ I pointed out.

But these kids had done their homework – to an extent. Politely the girl pointed out that washing machines had been invented before 1913. She had Googled it, after all! She was right: the first English patent for such a machine was issued in 1791, but domestic washing machines were not widespread until well into the twentieth century. Funnily enough, I had in my bag a book all about such things – the very readable If Walls Could Talk: An Intimate History Of The Home (Lucy Worsley), because that’s the kind of thing I like, and was able to prove it. We had a chat about how just because something existed, that didn’t mean it was available to ordinary people.

my kind of book, with washing machine

Which got me to thinking how different the past was in ways that we don’t imagine. The school is in an area of high deprivation, yet these pupils have the latest phones; their homes have widescreen TVs and wifi. They’ve grown up in a world where, at least in the west, once something is invented, ordinary people expect to have it. Which was not the case 100 years ago. In 1913, there was no shortage of laundry maids; if you couldn’t afford one of those, there was no shortage of industrial laundries, and if you couldn’t afford that, well, then you scrubbed and wrung and hung your washing as best you could at home.

That’s what I love most about writing historical fiction – not the facts, intriguing though these are, but the little things behind the facts. People’s attitudes. In Name Upon Name, the fourteen-year-old protagonist is embarrassed and unsympathetic when her eighteen-year old cousin – whom she loves – cries: He must still be inebriated. Boys – young men – well, they didn’t cry. He was supposed to be going to war.

Adult readers accept this as historically accurate; teens have queried it – Why is she being so mean? What’s the big deal? And – when I respond, they ask, But how do you know?

I know, I reply, because I read. Books about a hundred years ago. Most importantly, books written a hundred years. You can’t really Google people’s feelings.

Sheena Wilkinson
Twitter
Since the publication of the multi-award-winning Taking Flight in 2010, Sheena Wilkinson has been established as one of Ireland’s most acclaimed writers for young people. Groundedwon the overall CBI Book of the Year award in 2013, and her new novel Still Falling has been described (Inis Magazine) as ‘heartbreaking and heartwarming…an instant classic’. Sheena lives in County Down.

This entry was posted on February 12, 2016 by sheenawriter68 and tagged Historical Fiction, Research, school visits.