When you look at fan pages on the internet, it doesn’t take long to notice that many minor characters in both classic and modern literature are adored. Whether its the cheeky and confusing cheshire cat from Alice in Wonderland to the whimsical and awkward Luna Lovegood from Harry Potter, readers/viewers/voyeurs strike a chord with characters that don’t win the prize or are the ‘Chosen One’. Although these characters may not be central to the plot, calling them minor seems a bit unfair when you see how well loved they are, sometimes even more so than the main characters of the story!

Having just recently read ‘The Rest of Us Just Live Here’ by Patrick Ness I was fascinated by this subject of the ‘minor’ character. In this YA novel, The ‘Indie’ kids are the heroes who are destined to save the town and have epic journeys but Ness chooses to focus on their classmates who are not ‘destined’. They just want to make it through to graduation, and that’s OK!

The accessibility of the internet has made the world smaller, and finding others with similar interest and personalities is easier than ever. It has now become more acceptable to embrace your ‘quirks’ especially as you learn that you’re not the only one in the world who loves, for instance, Sailor Moon. Yep, When growing up I was obsessed with the anime and manga. Living in a small village with less than 100 people, it was difficult to meet people who even knew what it was! Then I remember being ten years old and discovering people online who loved it too! Before then enjoying something that not many people had heard of in my community felt like an embarrassing secret and it felt impossible to explain without my parent’s or classmates pulling a face at it, so I often kept it a secret. (I mean try explaining that its about 14 year old Japanese school girls running around Tokyo in ridiculously short skirts kicking some serious monster butt!)
Even now as a grown ass adult, I love Sailor Moon. I recently left my phone case (which had Sailor Moon on it) on the staff room table at work whilst I made a cup of tea and returned to see colleagues look at it in fascination saying “What is this from?” and I got so embarrassed and imagined in my head trying to explain it that I pretended that I didn’t know where it was from and that I thought the case just looked nice! (doh!) I could even write a few thousand words on how there isn’t even a minor character in Sailor Moon, in fact most people do not love the main character the most… but i’m not going to bore you!

The point of my Sailor Moon ramble is that with thanks to the internet, we can now more easily embrace and express our interests. No wonder the term ‘Geek’ is complimentary these days as it has become acceptable to like obscure things. Minor characters often share our fandom for hobbies or interests that make them important to the plot. Main characters are often awakened to new things upon meeting minor characters who teach them how to use a wand or to play the guitar to to even to just love The Smiths. 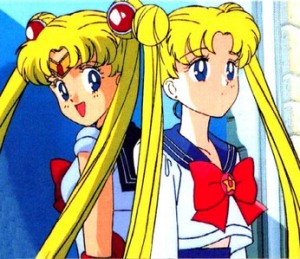 People celebrating more unique personality traits is possibly why minor characters seem to be becoming more and more popular. Often the Traditional main character embodies an almost perfect personality. Although they experience conflict within themselves and may have doubts about achieving their goals, ultimately they will succeed. These characters sometimes feel less relatable than their best friend who is watching from the side lines who is still an integral part of the story! Without Veruca Salt and Mike TV would Charlie still have got the chocolate factory? Probably. However, these characters emphasised Charlie’s purity and without them the story would ultimately be boring.

So, Hooray to the ‘Minor’ character – who deserves a happy ending just as much as the hero does.

Grace is a freelance illustrator and designer working from the south east of England. She graduated with a degree in Illustration from the University of Lincoln in 2013 and went on to work as an illustrator and designer for children’s magazines, board books and picture books.Twice a week Grace also works in the office of a Junior School and teaches art to some of the pupils. Nature and fantasy are often strong themes of Grace’s work and she has been inspired by nature ever since she was a child, always choosing to draw from nature in her work or by which book to read! Continue reading…

“Sandford’s illustrations, done from the cookies’ perspectives, help to leaven the story’s earnestness. They portray the gingerbread cookies with lots of personality and individuality.” — Kirkus Reviews for Tough Cookie

This entry was posted on November 13, 2015 by gracesandford and tagged Author Allsorts, Characters.