The Workhouse and the creepy corpse tunnels

Just the words THE WORKHOUSE send clichéd chills and shivers down my spine. Imagine knowing that the Workhouse was your only hope, your last choice, your final destination, rock bottom. And that’s what happens to one of my characters in The Boy who Drew the Future. Blaze ends up in the Workhouse because he’s left without any other options. His mother is removed from the manor house where she was a housekeeper, she’s French and has no family in England, no one to turn to and so all that’s left for her and her young son is the Workhouse. 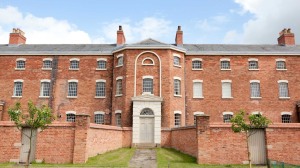 When I was writing the novel I watched a lot of episodes of Who Do You Think You Are which often led the celebrity back to the Workhouse, not surprisingly I found out that in Victorian England there were over 750 workhouses open to the poor and the destitute offering a roof over their heads, clothes on their back and food in their bellies. What shocked me as I plunged further into my research was that you had to ask to enter the Workhouse. You weren’t dragged there kicking and screaming, you had to ask the Guardians to accept you, to let you in. I can imagine nothing more humbling than having to utter those words.
I stumbled across a wonderful series of interviews with celebrities whose ancestors had experienced the Workhouse and it was during one of these programmes that I found out about corpse tunnels and the practice of taking the bodies of the Workhouse dead out through an underground tunnel. These bodies would be sold to Universities and other medical institutions to practice on and learn about the human anatomy.
I visited The Workhouse in Southwell on a sunny day a few years ago. I’d been doing a bit of a National Trust tour as part of my role as a National Trust Writer in Residence and had visited some beautiful and very interesting properties and the Workhouse was last on the list. I took the whole family, we packed a picnic and set off for a lovely day. As we walked up the long drive towards the Workhouse I felt a bit odd but shook the feeling off as the children ran up and down the vegetable garden. There were signs everywhere explaining that growing the vegetables and tending to the gardens would have been the inmates responsibility.

Not too bad I thought but then we approached the great front door and even though it was a boiling hot day, I went cold all over.

The tour started in a separate room that was once the school room, we watched a film about the history of the Workhouse and then were led out into the courtyard towards the water pump. I’ve used this setting in my novel and it was really useful to be able to have a turn at the pump and fill the bucket, as we discovered this isn’t an easy job and I imagined having to fill that bucket many times over in order to scrub the yard clean each morning.

The tour continued through the male dormitories and the female dormitories which felt like the saddest places on the planet as I  stood in them and looked at the eight beds lined up in a pitiful state. It was very easy to put myself in their shoes and imagine what it would have been like to sleep in those beds and share that space with complete strangers.

The jobs ranged from working outside in the vegetable gardens, down the in the dark depths of the kitchens, scrubbing, mending, cleaning and sewing in the laundry room all the way down to the worst jobs which were breaking stones and rock outside or unpicking rope inside. The males and females would be separated on arrival, no matter what their family connection and would remain separate throughout their time in the Workhouse. This broke my heart and I couldn’t help but imagine my character Blaze separated from his only remaining family member, his mother.

I knew that the Workhouse had tunnels underneath it leading off from the kitchen but when I came to write the novel I knew I wanted something bigger and more dramatic for my scenes in the tunnels in both Blaze’s timeline in 1865 and also Noah’s timeline in the present day when he visits the Workhouse on a school trip. So I turned back to my National Trust list and found Calke Abbey which has beer tunnels open to the public.

We set off on another summer holiday trip out to Calke Abbey and saved the tunnels for last. They are long, dark and very atmospheric. I walked down the tunnel with my two older children, my husband having decided that they might be too scary for the youngest. When my 11 and 8 year old ran off down the tunnel ahead of me whooping and testing out the acoustics I felt a real sense of panic. I wanted them back, holding my hands, not for their sake but for mine. I don’t scare easily, I love ghost stories and scary films so I wasn’t expecting to feel like this.
The dripping sound of the rain water seeping in through the bricks above me felt louder and louder as I tried to walk quickly towards the end of the tunnel and reach my children. My son turned the corner first and ran up the steep steps back into the light. I took my daughter’s hand, ready to help her in case she should lose her footing on the first step when we heard an almighty THUD behind us. I squeezed her hand so tightly that she squealed. My son paused and shouted “What was that?” and I could hear the fear in his voice. We all turned around and went back into the tunnel which was an odd decision as I’ve spent most of my teenage years screaming at the screen “Don’t go down into the basement/don’t turn back/don’t look around just run you idiot!” at the TV yet here I was leading my children into potential danger. But the tunnel was empty. No one in there. No sign of damage or accident. I was expecting to see bricks on the floor, the ceiling caved in, something but there was nothing, just silence and the drip, drip, drip of the rain.

The three of us ran up the steps together, never mind that they were steep and slippy and back into the light.

Setting and atmosphere are so important when trying to bring scenes to life and I find that once I’ve visited a physical place like the Workhouse and Calke Abbey I can then go home and picture my characters walking around those gardens, or sleeping in those dormitories and imagine what it would have felt like to run along those corpse tunnels or in some cases I don’t need to imagine because I’ve done it myself. So much for method acting, this novel has felt more like method writing. Maybe I’ll try and pick somewhere less scary to set the next novel.

If you want to hear me talk more about The Boy who Drew the Future and the Workhouse I’ll be at Waterstones Nottingham as part of UKYAExtravaganza on the 10th October 2015.

I’ll also be fairly chatty about all things historical at YAShot at Waterstones Uxbridge on the 28th October 2015.

5 comments on “The Workhouse and the creepy corpse tunnels”

This entry was posted on October 5, 2015 by rhianivory.