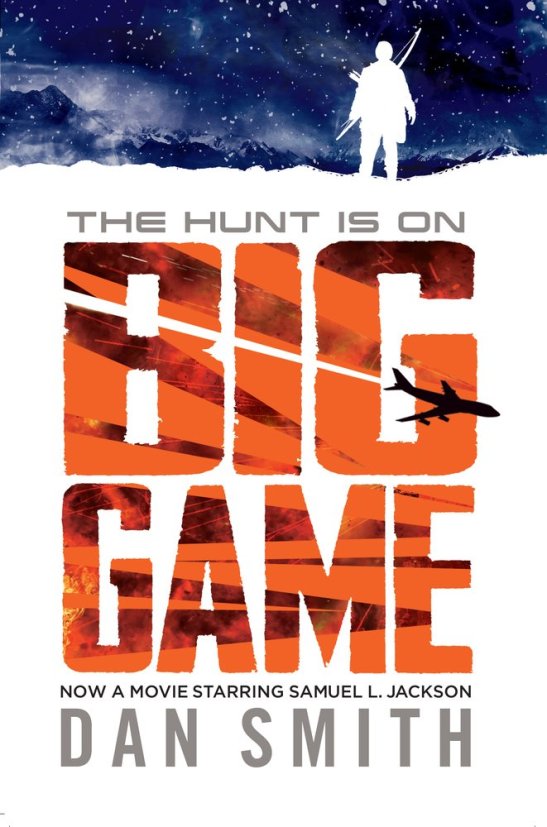 Hi Dan, Happy (belated) Book Birthday and congratulations on the release of BIG GAME, which was published by Chicken House on 1st January. Can you tell our blog readers a bit about the book?

Well, it’s only the MOST AWESOME book ever!

Right, now that’s out of the way . . . BIG GAME is set in Finland and is about a thirteen-year-old boy called Oskari who must head out into the wilderness to take The Trial, a rite of passage for every boy in his village. Armed only with the traditional hunting bow, Oskari’s task is to spend a night and a day in the wilderness. Whatever he kills and brings from the forest will indicate what kind of man he is going to be. The problem is that Oskari is a terrible hunter, he’s not very big, and he’s not even strong enough to draw back the traditional bow. He’d much rather stay at home and play video games. But on the very same night that Oskari enters the forest, terrorists shoot down Air Force One, leaving the US president stranded in the wilderness, hunted by killers. The only person who can keep him alive is Oskari.

The book is a bit different in that you were asked to adapt the story from a screenplay, which has now been made into a film with the same title, releasing in May. What was the process of writing it like?

The thing that seems most crazy to me now, is that when Barry Cunningham from Chicken House sent me the screenplay, my first reaction was, ‘I don’t think I’ll be able to write someone else’s story.’ But once I started reading it, I was hooked. It reminded me of those great films from the 80’s that I always loved so much – Raiders of the Lost Ark, The Goonies, The Empire Strikes back, Gremlins, ET, Back To The Future – films that were about adventure and action and . . . well, films that weren’t afraid to enjoy themselves. So many stories now seem to be going for a dark and moody tone that it was refreshing to lose myself in something that was Just. Great. Fun. Right away, I started to see how I wanted tell the story on the page rather than on the screen, and Chicken House was keen that the book shouldn’t be a ‘novelisation’ but a book in its own right, which suited me just fine. So I wrote a proposal of how I planned to tell the story – changing some of the events and details, cutting a few things, adding a few things, telling it entirely from the boy’s perspective – and waited for approval. You see, everyone had to approve, not just Chicken House. We also needed the producers and the director/screenwriters to approve. In terms of actually writing it, though, I approached it like I would approach any of my novels, except this time it was a little easier because I already had a story to work with, rather than having to make it up.

Sooo…If you were 13 and had to undergo a wilderness challenge to prove you were a man, what would it be and why?

Ha! What a great question! Maybe this should be one for every author interview. You know what, though? Just spending the night alone in the wilderness would be an amazingly brave thing to do as a 13 year old. When I was a teenager, my brother and I used to camp on the riverbank in Brazil, and it could be very creepy. I remember we went into the forest one night, intending to sleep there, but it was SO dark, and there was this awful smell of rotting, and then we stumbled across some kind of den . . . we high-tailed it out of there pretty quickly!

Yikes, that sounds terrifying! You spent part of your childhood in the Brazilian jungle and the padi fields of Asia. Did you ever have any adventures to rival Oskari’s?

Well, I did have a lot of adventures – tracking tigers, climbing active volcanoes, fishing for piranhas, being stranded on immense rivers, riding white water on inner tubes from logging trucks, learning how to fish and hunt and shoot and . . . no. Not once did any presidents ever crash. There was a plane crash – a light aircraft came down in the forest close to our estate – but I’m pretty sure there were no presidents on board.

Exciting stuff! If you were lost in the forest, what book would you have with you and how would it help you survive?

Lord of The Flies . . . or maybe not. Actually, growing up, my brother and I swore by a book (amusingly) called ‘Bushcraft’, which had all kinds of survival advice, but I have no idea what happened to it. Instead, I would probably take along my pocket SAS survival guide – if I could wrestle it away from my son. A good knife and a fire kit would be pretty handy, too.

OK, onto the writing questions – what was the most fun part about writing BIG GAME?

Writing a book is a lot of hard work, so it was great to already have the story set down. That eased a lot of the pressure, giving me time to really enjoy fleshing out Oskari’s character and give him more of a backstory. I had a lot of fun researching all the survival stuff – finding out about tracking, fire making, bow hunting – and it was great to write all that action.

What did you find the hardest?

The hardest part was that I was writing a book based on a film starring Samuel L Jackson and Jim Broadbent and I wasn’t allowed to tell anyone! I had to keep it all to myself for such a long time!

And I’m dying to know… what’s next?

I recently finished writing my next book for younger readers and sent it to Chicken House before sitting at home chewing my fingernails, hoping they’d like it. After the enjoyment of writing BIG GAME, and the amazing reception it’s had all over the world, my next book just has to be an action adventure with high stakes. So, on a remote island off the coast of Central America, Ash and Isabel have just 24 hours to find Ash’s sister, rescue their parents, and save the world. The initial response from my editor and from the brilliant Barry Cunningham has been good, but there will, no doubt, be lots of editing to do.

That sounds fantastic! Thanks for such great answers, Dan, and best of luck with BIG GAME. You can buy the book from Amazon and The Book Depository. I’ve already read it and can highly recommend it. And as a bonus, here’s the trailer for the film, which looks fantastic as well!

Website|Blog|Goodreads|Facebook|Twitter
Growing up, Dan Smith led three lives. In one he survived the day-to-day humdrum of boarding school, while in another he travelled the world, finding adventure in the padi-fields of South East Asia and the jungles of Brazil. But the third life he lived in a world of his own, making up stories . . . which is where some people say he still lives most of the time!
Now settled in Newcastle with his wife and two children, Dan writes his stories to share with both adults and children.

Dan’s first book for younger readers, MY FRIEND THE ENEMY, has been long-listed for the Branford Boase 2014 and shortlisted for the NE Book Award 2014. It will be published in the US in Fall 2014. MY BROTHER’S SECRET will be published in the UK in 2014 and later in the US. Early 2015 will see the publication of BIG GAME, followed by the release of the film, starring Samuel L Jackson.

Website|Blog|Goodreads|Facebook|Twitter
Emma Pass has been making up stories for as long as she can remember. Her debut novel, dystopian thriller ACID, was the winner of the 2014 North East Teenage Book Award. It was followed by THE FEARLESS, another stand-alone thriller for young adults, in April 2014. She lives with her husband and crazy greyhound G-Dog in the North East Midlands.