Murder Most Unladylike and diversity in children’s fiction

Diversity in children’s literature is something I believe in very passionately. Books are all about connecting to something outside yourself, and a reader should have the opportunity to experience the widest possible range of characters and stories. I know that this is important, and I always have, as both a child and an adult, but since I published Murder Most Unladylike in June this year I’ve been able to see more vividly than ever what giving children books with diverse characters really means, and what a diverse reading experience can do.

The narrator of Murder Most Unladylike, Hazel Wong, is Hong Kong Chinese. A lot of my own friends at boarding school were, and so when I was thinking about a background that might make a character an outsider at a British school, it seemed a natural choice to make. I wanted to show that there are kids at even the poshest boarding school who aren’t upper class and white, and describe some of the difficulties with being that nonconforming child. 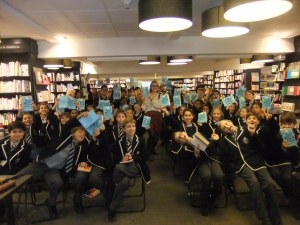 A room full of Hazels (and a few Daisies)

I’ve been doing quite a few school and bookshop events recently, and during my presentation I do a quiz to help kids discover which of my two detectives they are. It’s possibly pre-skewed, because most of my audience are thoughtful, bookish kids (which is why they’re sitting in a bookshop, being talked to by an author), but every time I’ve run the quiz we’ve had a huge majority of Hazels. Seeing a roomful of children, almost all of whom don’t happen to be Asian, putting up their hands and announcing proudly that they are just like Hazel is heartening. To most of my readers, the fact that my narrator is smart, and observant, and an amazing detective, is more important than the fact that she’s Chinese. Or – in the case of my male readers – a girl. At one event, I had a very bouncy boy who sat in the front row and had his hand constantly in the air, and at the end of the quiz he bellowed ‘I’M DAISY!’ It’s moments like these, the feeling of connection to another person who is like you, even if they don’t look like you, that are so important for all children (and all humans) to experience, and that’s what fiction can do.

For most children who read Murder Most Unladylike, what Hazel looks like doesn’t really matter. What she looks like is a big part of who she is – as it is for anyone – but as the narrator, it’s what’s inside her head that matters, and that’s the part of her that readers get to know. Her race probably hardly registers, and that’s fine. To some, though, it clearly does, and this is the other reason why diversity is so important.

I’ve been hearing from the parents of some readers who do happen to look like Hazel, and those stories have been wonderful. A woman from Singapore, whose surname happens to be Wong, wrote to me to thank me for putting a Chinese girl in my book – her daughter was delighted to come across someone in a novel with the same last name as her for the very first time. If you really think about that fact, it becomes incredibly depressing: Wong isn’t exactly an uncommon name, after all. Hazel is different compared to the other girls at Deepdean in 1934, but in an ideal 2014 she shouldn’t be standing out in a line-up of literary heroines.

But the fact is, she does, and discovering someone who not only feels and acts the way she does, but looks the way she does, clearly mattered enormously to that girl. She finally saw herself in a book – and if Hazel can be a heroine, so can she. To me, that one story is enough to prove why diversity of race and gender and sexuality is crucial in children’s fiction. It won’t matter to anyone who doesn’t share that race, or that sexuality – but to anyone who does, it means the world.

I’m not saying that I’ve done anything particularly new, or even anything particularly unusual, in making Hazel my main character. I’m only one author – to make real change, we need a multitude of authors and a multitude of stories. But all each of us can do is a little bit – and I think it’s really important to remember that you shouldn’t be afraid to write about characters who don’t share a background with you. The details can be researched, after all, and if it’s possible for an author to imagine what it’s like to be a dragon or an elf, it surely is possible to imagine what it’s like to be another human.

We’re all agreed that we need diverse books. So let’s do all we can to make sure that we get them.