When I first started out as an illustrator I was phobic about drawing machines, any machine, making depicting modern life something of a challenge. Anything with metal and engines and dials. Cars and vehicles especially. And worst of all, a bicycle: the shape is fiendishly difficult to get to grips with – the wheels, the spokes! Have you looked at spokes recently? You’d think they would radiate evenly from the centre but NO, they are strange sets of pairs moving in unfathomable ways.

Anyway, in my first ten years in publishing I only drew one car, just about recognisable but discreetly tucked away where no one would pay it any attention.

Then when Mum wrote Dixie O’Day for me, full of cars, the colour drained from my face but I knew I had to up my game. I looked and looked, at real cars and crazy cars. I realised that there were artists having some serious fun here.

My research involved some strange flea market purchases, too.

And now I can’t leave them alone and draw vehicles whenever I get the chance. I’ve started to see them not as metal and engines and dials, but as characters in their own right. Not like people of course, but maybe a little like animals, with distinct movements, noises and intentions. 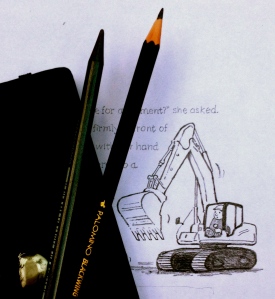 I’d have been very surprised.

At last I am the three year old boy I was always meant to be.
I still can’t draw a bicycle wheel, though.

One comment on “My biggest drawing blind spots by Clara Vulliamy”

This entry was posted on September 16, 2014 by authorallsorts and tagged books, Clara Vulliamy, Drawing, Illustrating.