I had a great time meeting up with the talented children’s author Mo O’Hara and talking about all things Zombie Goldfish and more. Her latest book, My Big Fat Zombie Goldfish- Any Fin Is Possible is out today.

Ged: So Mo, what do Tom, Pradeep and Frankie get up to in the new book?

Mo: In this one I had a lot of fun writing the first story especially. They go to the British Museum and have a sleepover.

Ged: Do they actually have sleepovers at the British Museum?

Mo: Yes they do- I think you have to be seven or older but you go in a group for a sleepover and they take you round and do all this cool stuff.
Anyway in the story, they go to one of these sleepovers at the museum and Tom and Pradeep’s big brothers plan to awaken a mummy. It’s a cat mummy and the brothers want to bring it to life so they can make it their evil slave and do battle with the zombie goldfish. So it’s Cat Mummy versus the Zombie Goldfish!
The second story is set at the school sports day. Anything sporty is usually totally out of character for Tom and Pradeep but through a series of events, they end up competing on the day along with their unathletic pals.

Ged: How did the characters originally come about?

Mo: I definitely felt like Tom’s voice kind of came to me. I write him in first person because that’s easier for me. As an actor, I just decide I’m going to be him for a while. Then I can switch to being objective author and look down and say “That works, that doesn’t work..”. I think I do it as a role, getting inside his head.
I also wanted there to be a multicultural aspect in there as well because I don’t think there are enough books out there that do that. Or, if they do, the multicultural part is the main point of the story. It was a big deal to me that Pradeep was Pradeep- the fact that one friend is from one background and the other is from another background is irrelevant. They’re best friends and they do exciting things and if you see yourself in this kid or that kid, that’s great.

Ged: When you come up with new ideas, do you have to think like a kid?

Mo: I think it’s got to crack me up. If it doesn’t crack me up, if I write it in a more dryer way, it won’t come across as funny.
When you’re doing a series, it’s like thinking about it in a sitcom way because you’ve got these characters that you’ve established and you’re just trying to draw them in different situations. So this is the one where the mad uncle visits; this is the one where they go on vacation and so on. Like you would in a sitcom, you put them in situations out of their comfort zone.
So each story is really sitcom-y. It’s like I’m writing an episode of Friends that has nine year old protagonists!
You can have some character development but, like in Friends, the characters don’t change fundamentally. You know, Ross is always Ross and Monica is always Monica.

Ged: It’s like a rule isn’t it? It would be weird if suddenly took it somewhere else.

Mo: Yes they have to revert to type eventually. Like in book three, I have Tom’s evil older brother Mark being zapped with a ray that changes your personality. Mark goes from being evil to being overly polite and nice. So through the story they’re dragging him round and he’s saying things like “Can we have a brotherly hug?” and Tom’s saying “Get off!” But he reverts back to his normal self in the end.

Ged: It must be hard to keep coming up ideas for the same characters.

Mo: Well for one thing, it’s really hard logistically to move a fish around! How do we get this fish from A to B? We’ve done drinks cans, lunch boxes, hot water bottles, anything you can conceivably keep water and a fish in. And the fish has to occasionally get somewhere on its own. You know, rolling downhill in a plastic bag!

Mo: I know, like there’s one where Frankie the goldfish is in Tom’s mouth for a long period of time and he’s trying to get out, crashing against Tom’s cheeks like the side of a football net.

Ged: What do you think makes a successful children’s character?

Mo: For the zombie goldfish books I think it’s less that kids want to be Tom and Pradeep, it’s more they want to do what they’re doing. They can see themselves having those adventures. The two main characters aren’t endowed with superpowers. They’re average kids from average families. The same embarrassing stuff that happens to the kids who read the books, happens to them too.

Ged: They can identify with them.

Mo: Exactly. They have the same issues with older brothers or sisters, the same relationship with their parents, school. But they just happen to have a zombie goldfish thrown into the mix! Wherever the reader is, London, Kentucky, Turkey, hopefully they’ll be thinking “That could be me.” 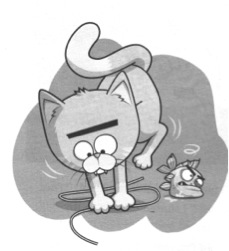 Ged: I love the illustrations.

Mo: Marek [Jagucki] works very quickly and he draws right onto the computer. He can change the positions of the characters and make edits without having to redraw the whole thing. Every time I get the illustrations back for a new story I’m so excited to see what Marek has come up with. His illustrations make me crack up all over again at a story I’ve read dozens of times.’

Ged: And the covers are great. When you see Frankie the fish in bookshops, he stays in your head.

Mo: The publishers had commissioned the cover and you have to decide that really early on. In story one of the first book, there was a joke about zombie goldfish not having teeth- and here he was on the cover with these teeth!

Ged: But they loved the cover so much.

Mo: Right! I got it on the Friday and looked at it over the weekend and showed it to my kids. It’s an image not too realistic or scary for a young kid yet a ten year old would still pick that up, it’s not going to put them off. I think it’s pitched really well. So we all agreed about the teeth and the part with the joke was changed before the final stage.

Ged: Was it always the idea to have two stories?

Mo: My initial submission was 9,000 words and that’s how I thought it would be published but Macmillan wanted to do two stories in one book. They said we have to make it a chunkier book otherwise the ten year olds won’t take it off the shelf.
It totally made sense. The six to seven year olds will be like “wow I finished a whole story!” and the ten year olds will say “That’s a decent sized book- I’m not going to be embarrassed carrying that around”.
We came up with the idea of having a more action packed story- we call it the ‘away’ story-and we could be at the British Museum or the aquarium or at the seaside, basically a more adventure type one. And then we have a more ‘domestic’ one- you know like sports day, the school play, a local contest for best pet. Doing something more low key and finding the comedy in that.

Ged: What stuff do you think has influenced you?

Mo: Douglas Adams. I love sic fi and his stuff in particular. When I was nine and ten I pretty much read Paula Danziger who wrote The Cat Ate My Gymsuit and Judy Blume but my voice isn’t that kind of voice. I also absolutely loved the Phantom Tollbooth by Norton Juster.

Ged: Have you seen the cartoon? I saw it when I was a kid. The songs are brilliant and I still remember them now.

Mo: I also loved A Wrinkle In Time by Madeleine L’Engle.

Ged: Is there anything new you’re working on at the moment?

Mo: I’m working on two picture books. It’s a new experience for me. A friend of mine who does picture books explained the process as a stage play being adapted to a movie.

Ged: That’s a really good way of looking at it.

Mo: Everything’s told in an image. If the stage play has some dialogue, the movie might just show a wide shot. Merek’s illustrating one of them so I’m excited about that too. For that one, I got the idea from a trip to the seaside with my daughter when she was little. 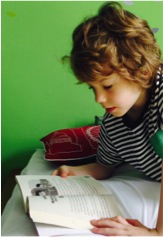 Rex Adamson’s review of My Big Fat Zombie Goldfish- Any Fin Is Possible:

I liked it because the zombie goldfish wasn’t a regular goldfish. He zombified people and made them keep saying “swishy fishy.” I think Pradeep and Tom are cool characters. I think the sports day story was the best but I liked the museum story because they introduced something scary right at the start. I like the way Frankie was always trying to get the evil vampire kitten of Mark’s.

Mo O’Hara
Website|Facebook|Twitter
Mo’s book for 7+, “My Big Fat Zombie Goldfish” is published with Macmillan in Feb 2013 in the UK and in July 2013 in the US. Her second book in that series( My Big Fat Zombie Goldfish The Sea-Quel) will come out in July 2013 in the UK and in winter 2013 in the US. She also wrote six books in the Ladybird series “Puddle the Naughtiest Puppy.” Mo worked as an actress and as a storyteller, touring theatres and schools all across the UK and Ireland. As well as her stories for children Mo has also writen for radio and theatre and has performed her own comedy material in London and Edinburgh.

Ged Adamson
Website|Facebook|Twitter
Ged Adamson is a children’s writer and illustrator. His cartoons have been published in magazines, in books and appeared on film and TV. He’s been a storyboard artist and a caricaturist. Big influences on his work are Quentin Blake, Ronald Searle and James Gillray. He also works as a music composer.
He’s a London history enthusiast. He lives in Greenwich with his partner Helen and their son Rex. His first picture book, Elsie Clarke And The Vampire Hairdresser is published by Sky Pony Press. His second, Meet The McKaws, is out in 2014.