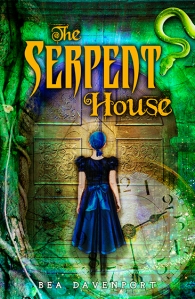 As I got into the Hall grounds, the sick, dizzy feeling came over me again, as if I was about to fall over. Was that a whispering in my ears? Was someone saying my name?

1.    Happy Book Birthday. Could you tell us how you are feeling?

As an author I should be able to come up with something more original than ‘happy and excited’, shouldn’t I? But in fact I’m a bit overwhelmed. I’ve longed for this moment for a few years and it’s hard to believe it’s really happening!

2.    THE SERPENT HOUSE sounds amazing. What was your inspiration for this story?

Thank you! It came from two different strands. The village where I live, near Berwick upon Tweed, is named Spittal, after the ancient leper hospital that was once here, and I very much wanted to write about that. I also wanted to pay tribute to my three great-aunts, all of whom worked in service in large houses in Newcastle and Cumbria, at the turn of the twentieth century. Bringing in a time-travel device was a way to marry the late Victorian era with the Dark Ages and this turned out quite well. The Victorians were fascinated by the medieval period and they were also rather morbidly interested in illness and death. Just don’t ask me where all the snakes came from – in real life, I’m terrified of them!

3.    What draws you to historical fiction?

In this case it was that the plot came first. For me, this story needed to be told from two periods of the past. There are also some other fascinating historical times I’d love to write about. I think the story dictates the genre, though. I’ve also written contemporary novels, so although I love historical fiction, I’ll write in other genres too.

4.    Historical novels require a fair bit of research. What was the most interesting thing you learned while you were doing this?

I started off with a lot of preconceptions about how badly medieval lepers were treated and it took me by surprise to discover that, for the most part, they were looked after rather well. There are a lot of myths about medieval leprosy that don’t stand up to scrutiny. It was also fascinating to back up the stories I’d heard about the lives of women working in service, and to think that for me, that world was just a couple of generations ago. It all took a great deal of research, but luckily I really enjoy this part of the process.

I loved finding out about the strange cures used to treat leprosy (and other diseases) in the past. Among the ‘cures’ were a herbal drink made of sage, mint, radish, wormwood, stinking camomile and nettles mixed with red wine; the flesh of a hedgehog was meant to stimulate hair growth (ouch!); and hares’ blood was used in ointments. Snakes and venom were often used in ‘cures’ and medieval physicians also used preparations involving gold, silver, copper, iron and cinnabar.

It’s a composite of places. My own house is a Victorian building that was built by a stonemason in 1850 and he used it as a showcase for his skills, so there is a pattern on the brickwork which looks like fish scales. That’s one of the inspirations behind the snake motifs in Hexer Hall. But I also used the big kitchens in houses like Wallington and Cragside in Northumberland as further inspiration, so I could see Hexer Hall in my head.

7.    What about the medieval leper hospital?

Although many centuries ago there was a real leper hospital in the village where I live, not much is known about it today. There are no images of what it may have been like and local historians aren’t even sure exactly where it was. But I used research from other leper hospitals of the same era and I’ve also pinched one or two local legends about the old hospital and put them in the novel.

I’ve done a wine-tasting course and I’d love to learn more about that skill. I like mooching around museums and galleries and, of course, I’m an avid reader. But I also teach creative writing so I don’t have a lot of spare time. I’m happiest when I’m writing!

Bea Davenport is the writing name of former BBC and print journalist Barbara Henderson. Bea is already a published crime fiction author. The Serpent House is her first novel for children and was written as part of a Creative Writing PhD at Newcastle University. She lives in Berwick upon Tweed.