Do you remember your very first book?

I’m pretty good at throwing away clutter, in the interests of feng shui and less to do at the annual dusting.

The attic, though, is under different jurisdiction, and piled high with mementos. Luckily, moving house six times in six years has given me plenty of excuses to sift through and find things like the first book I ever wrote. Or at least, the first one I bothered to staple-bind.

A dog visits a zoo. But the cover only hints at the peril that will unfold… 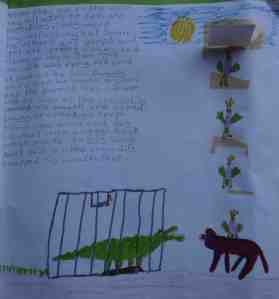 The plucky parrot saves the day, they all get an ice cream and catch the bus home. It’s no Just Jake. But I thought the back cover was quite revealing: 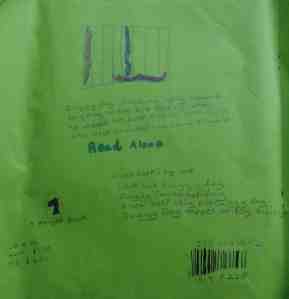 ISBN, series promo and priced in three territories… I’m not surprised this seven-year-old ended up in publishing.

Isabel Thomas studied Human Sciences at Oxford University before becoming a writer. Her books for young people include HOW TO CHANGE THE WORLD (OUP), shortlisted for the Royal Society Young People's Book Prize 2016, and SELF-DESTRUCTING SCIENCE: SPACE (Bloomsbury). Isabel lives in Cambridge, where she is zookeeper to three young sons. Website: www.isabelthomas.co.uk Twitter: @raisingchimps
View all posts by Isabel Thomas →

2 comments on “Do you remember your very first book?”