I’m thrilled to be interviewing Ellen Renner on the day the truly wonderful TRIBUTE is published! If you like high fantasy or stories of strong characters fighting against impossible odds, you will LOVE Tribute! I certainly did! 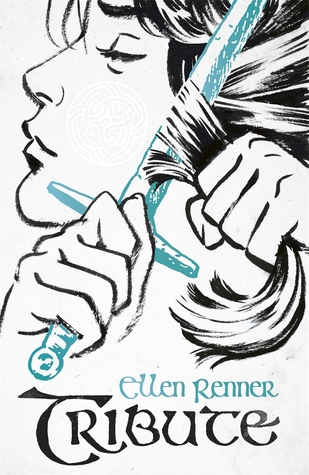 Hi Ellen! Thanks for stopping by. Can you tell us a little about Tribute?

Tribute is my first YA fantasy. It’s the story of Zara, one of the elite magic-users of her world – a world literally divided by magic. She’s the daughter of Benedict, the Archmage of Asphodel, whose life has been the pursuit of absolute power. Her story starts when her best friend, who is also her Tribute child (a non-magic slave) is killed for the crime of literacy.

Tribute is about power and what too much of it does to the person who has it. It’s about how those in power try to control knowledge and education. And it’s about one of the most dangerous aspects of human nature: tribalism.

I know you have lots of ideas, so what drove you to focus on Tribute?

An editor asked to look at my ideas, and very soon after that publishers were bidding for the concept both here in the UK and in Germany, where it comes out next month. Scary but exciting. Left to myself, I might gone on to write it next, or I might have started the third Castle of Shadows book, which has been waiting for me to finish other writing commitments. But when you have a contract, it concentrates the mind! So Castle three is still waiting, but I hope to get to it later this year.

Thank you! The honest answer is that I don’t know. You’re right: my books are character-driven. For me, plot is inextricably linked to the character arc.

In this book for the first time, I have used a couple of real people as the starting point for character development, but only as a starting point. Usually, my characters seem to wait in a casting room somewhere in my head and pop out fully formed when I need them, name and all. I know it doesn’t work like that, but that’s how it feels. Very like the Diana Wynne Jones’ story Carol Oneir’s Hundredth Dream.

I did have a lot of trouble deciding how to write Aidan, Zara’s romantic interest in Tribute. She falls for him for lots of deep-seated psychological reasons to do with her own situation, but which I can’t overtly state. I needed him to be an ambivalent character, for reasons which will become clear in the second book, so he took a couple of attempts.

Who is your favourite character in Tribute and why?

Not a fair question! That’s like being asked to choose between your children. I do identify a lot with Zara: she’s an empath and feels things deeply and I tend to be on the passionate and obsessive side. Zara has a strong desire – a need – for the world to be just.

After Zara, it has to be Twiss, the twelve year old thief. She’s just so bloody brave and cheeky and stubborn and very very human. I love her to bits.

Another aspect of Tribute that I loved was the world building – it all feels so solid and real. Where did the inspiration come from for the various city states, and what new locations can we look forward to seeing in Outcaste?

Thank you! My Castle of Shadows books were alternative history, rather than pure fantasy: they’re set in a Victorian world and I simply researched and used the technology and social structures of the time.

Tribute is my first ‘proper’ fantasy and yes, there was a LOT of world building that had to be done. It took nearly a year of just thinking about how the two opposing societies in this world: the mage society and the Maker one, would operate. The city states are pretty obviously a reference to Italian city-states of the late medieval/early renaissance period. Asphodel even has Roman-like catacombs where the thieves live.

In Outcaste we travel to the Maker world, on the other side of the enormous wall which separates the two societies: a wall which is the site of centuries of war between the mages and the Makers.

Are you a plotter or a pantser? Did you learn anything new in the process of writing this book?

I am such a pantser. I’ve tried and tried to plot extensively in advance and it just doesn’t work for me: kills the desire to write the story. I need to make the journey of discovery with the character: this may be the norm for writers who are character, rather than plot-driven.

Since I know my character and their problem – the conflict – when I start I have a beginning and place in their emotions I want to get them to, and a few high points along the way. Then, once I have a skeleton cast of characters assembled, I get stuck in. And of course, there’s a lot of rewriting. But given sufficient time, and deadlines that aren’t too hairy, I really enjoy the process of exploration. I write because I want adventure.

I discovered that the world building involved in writing a big, epic fantasy cannot be rushed: there are no short cuts. I also learned you can slip a bit of humour into even the darkest book.

Tribute is your first (and hopefully not your last) foray into YA. Was it very different from writing middle grade? Did YA pose any particular challenges?

The romance, again. I wanted a Romeo and Juliet angle because the book features two societies in opposition, literally at war. Also, I needed Zara to open herself up to the fear of loss that loving entails: something she hasn’t done since childhood. I found writing the romance and sexy stuff challenging: I’m used to murder and mayhem: I do like writing action scenes. But romance is also where the humour was to be found – let’s face it, sex and love can be quite funny – especially those problematic communication issues. There’s a particular scene where Zara has to talk to Aidan, to tell him something which will save his life, and the only way she can get to him is to inhabit the body and brain of a cat. That was fun.

The biggest challenge, though, was probably tense and point of view. I started the book with multiple points of view and in close, limited third person, which is my preferred style. But because the book is so intensely about Zara’s emotional journey, it became clear fairly early on that I had to write it in her pov only, and from as deeply in her head as I could get. So Tribute is written in first person, present tense. It took a bit of getting used to, but it was fun pushing at the limits of imposed by always being in Zara’s head. For me writing is about challenging myself to grow as a writer. I think I’ve done that with Tribute, and Outcaste is providing a whole new set of challenges, so I’m happy!

Thank you, Sharon, for inviting me onto Author Allsorts, and for some really good questions!

Thank you for stopping by, Ellen!!! See, I didn’t ask anything embarrassing at all… Not a single question about…

Yes, if you didn’t know – Ellen is a biker and not obsessed with bikes at all!

If you like the sound of Tribute, then why not pop over to the Hot Key blog and check out Ellen’s short story set in the world of Tribute: MY ENEMY’S EYES.

Ellen Renner
Website|Facebook|Twitter
Ellen was born in the USA, but came to England in her twenties, married here, and now lives in an old house in Devon with her husband and son. Ellen originally trained as a painter and surrounds herself with sketches of her characters as she writes. She spins wool as well as stories, knitting and weaving when time allows. She plays the violin, fences (badly!) and collects teapots and motorcycles.  Her first book, Castle of Shadows, won the Cornerstones Wow Factor Competition, the 2010 North East Book Award and was chosen for both the Independent and London Times summer reading lists and, along with the sequel City of Thieves, was included on The Times list of best children’s books of 2010. It is published by Houghton Mifflin Harcourt in the USA. Under the name Ellen Richardson, she is the author of the Oxford University Press’s 8-12 series for girls, The Flip-Flop Club. Her first foray into Young Adult fantasy, the Tribute sequence, will be published by Hot Key Books in the UK in 2014 and DTV Junior in Germany in 2015.

Sharon Jones
Website|Blog|Goodreads|Facebook|Twitter
Undiscovered Voices 2012 winner, Sharon Jones, has been writing since childhood. While studying for a degree in politics and then a Masters in theology, she worked in two independent bookshops where she developed a love of young adult fiction. Sharon gained a doctorate in the theology of story whilst being den mother to 500 undergraduates and has taught courses on everything from the philosophy of education to the history of Neo-Paganism. Having lived in Liverpool, Cambridge, Warwick and Colchester, she now lives back in her native Lancashire with a giant white poodle, Harvey.

This entry was posted on March 6, 2014 by sharonjoneswrites.