Clara Vulliamy: If I wasn’t a writer-illustrator I’d be…

There’s nothing else I ever wanted to do, nothing else I could do.
Embarrassingly I’ve never been employed, and now I guess I’m utterly unemployable. My Mum, in a half-hearted bid to stop me becoming yet another artist in the family, urged me to have a shoe shop (which is odd because I don’t see her doing a proper job either…)

There’s only one time I’ve looked at someone and thought – I could do that! If I wasn’t making children’s books I’d be… 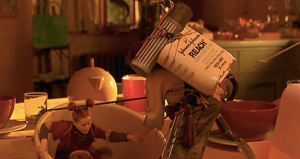 This is because I’m a hoarder and a rummager, and a darning, hammering, make-do-and-mend sort of person. We make our own of everything in this house and only throw away clothes if there’s nothing left but holes.

And I do really love tiny things. Some are found things, like this old Russian matchbox discovered behind the fireplace, and some I’ve made.

(I have no idea what I’m going to make with my tiny nun and children, though – all ideas gratefully received!) 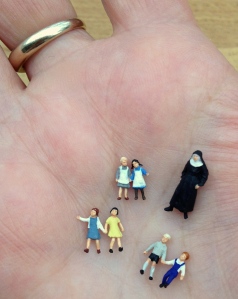 So, I may not be fit for the workplace and I never did have that shoe shop. In other life I’ll be under your floorboards making soup in a bottle top.

2 comments on “Clara Vulliamy: If I wasn’t a writer-illustrator I’d be…”

This entry was posted on January 24, 2014 by kateormand and tagged Clara Vulliamy, Craft, Illustrator, Writer.