‘Does Your Narrator Know That Someone is Reading Their Story?’

The concept of the fourth wall originally came from the theatre. It’s an imaginary wall at the front of the stage, separating the audience from the fictional world of the play. The idea extends to any sort of fiction, including novels. The reader is always outside the fictional world, looking in through this wall at the action, but the author can make decisions that affect the thickness of the wall in a novel. They can choose to continually remind the reader of the wall so it becomes a substantial barrier. They can make it paper thin so the reader becomes swept up into the story. They can even deliberately make holes in it.

Every reader is different, but personally I find it’s a combination of three things that affect my awareness of the wall between me and the story. The type of prose, the changes between viewpoint characters, and the point of view used to tell the story. When the prose is either so ornate, or so beautiful, that I’m stopping to study the words, then the fourth wall becomes thicker. When a story follows one viewpoint character, then changes to follow another, then the discontinuity reminds me I’m outside the story. But for me, the biggest factor affecting the thickness of the wall is usually the point of view.

When I wrote my first book, EARTH GIRL, I wanted to have the thinnest wall possible between the reader and my main character, Jarra. My aim was to immerse them in her thoughts and feelings. That particularly influenced my choice of point of view.

Universal omniscient wouldn’t have worked because it creates a very thick wall. The first two rooms on the top floor were empty, their owners down in the common room. In the third room, a boy was listening to music. In the fourth room, a girl was pacing up and down, about to make a decision that would change her life.

Third person viewpoint gave a much thinner wall. Jarra only had half an hour left before she had to make the decision on her university course and future career. She knew she needed to do some hard thinking. Instead, she was watching the vid.
But first person viewpoint seemed to work best of all. I was due to meet Candace in half an hour and tell her my decision on my course, my career, my whole future life. I still hadn’t made up my mind, and really needed to do some hard thinking. Naturally, I was avoiding doing that by watching the vid.

So I chose to write EARTH GIRL in the first person, and tell the story entirely in Jarra’s own words and thoughts. Having made that decision, I was faced with another. Was I just telling the story from Jarra’s viewpoint, or was Jarra herself telling this story to someone? 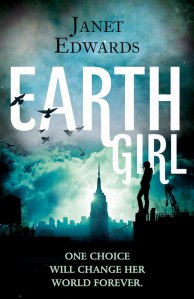 I decided Jarra was telling the story. She’s living in the 28th century, where humanity portals between hundreds of colony worlds . . . except for the unfortunate few whose immune system can’t handle living anywhere else but Earth. She was sent to Earth at birth to save her life, abandoned by her parents, and raised in institutions. She’s angry, and she’s writing a book to tell norms what it’s like to be the one in a thousand who’s born Handicapped, how it feels to be treated as less than human.

I’d already deliberately made the wall between the reader and Jarra as thin as possible. Now Jarra herself was writing the book, telling her own story, I could go a dangerous step further. I could actually break the wall, by having Jarra address the reader directly. Yes, I’m one of them. The polite people would call me Handicapped, but you can call me ape girl if you like. The name doesn’t change anything. My immune system can’t survive anywhere other than Earth. I’m in prison, and it’s a life sentence.

Jarra only breaks the wall right at the very start of the book, and on the last page. I think it adds to the first strong impression of her as a character, but breaking the wall once the main narrative was underway would disrupt the reader’s immersion in the story. There was also the unusual problem that Jarra couldn’t address the real reader of the book, because she was living centuries in the future, so she was addressing a normal born reader in her own time.

EARTH GIRL is the first book in a trilogy, so I also had to decide how to handle these issues in the other two books. Jarra is writing those books as well, but she doesn’t break the wall again, and she is writing for different readers. In EARTH STAR, she’s writing the book for future historians, telling how she got involved in some major historical events. In EARTH FLIGHT, she’s writing the book for just one reader, and for a very special reason.

Janet Edwards
Website|Blog|Goodreads|Twitter
Janet Edwards lives in England. As a child, she read everything she could get her hands on, including a huge amount of science fiction and fantasy. She studied Maths at Oxford, and went on to suffer years of writing unbearably complicated technical documents before deciding to write something that was fun for a change. She has a husband, a son, a lot of books, and an aversion to housework.
Find out more about her and her EARTH GIRL trilogy at www.janetedwards.com

This entry was posted on November 11, 2013 by kateormand and tagged Earth Girl, Janet Edwards, Narrator, Writing, YA.