I can only invent a new character with a pencil in my hand and a scrap of paper in front of me: what they look like and who they are utterly woven together. These are the pencils in my pencil-case, solid graphite for a rich velvety line, ranging from soft to very soft, pointy to blunt…
(it’s a truthful picture, so I didn’t remove the sachet of HP sauce that was mysteriously in there too)

Doing the illustrations for Dixie O’Day, the new collaboration with my Mum Shirley Hughes, was a departure for me: for the first time I would be working in black and white (with a splash of colour, but only here and there). 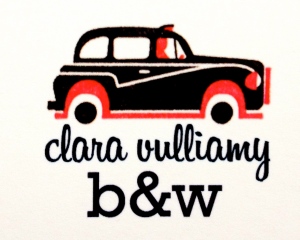 Giving visual form to Dixie, because I’m not the author too as I usually am, meant reading the text and responding to the words in a very immediate, instinctive way. I knew at once that he should be a dog, a bit stout around the waist, with a dashing Mad Men style three piece suit and a reassuring smile.

I looked carefully at pictures of real dogs, and then put them out of my mind. I also played my favourite game which is Mad Men Yourself –
http://www.amctv.com/shows/mad-men/mad-men-yourself
– perhaps rather too much, but that’s another story.

The following pictures are from a rarely seen notebook of my first character sketches for the book. 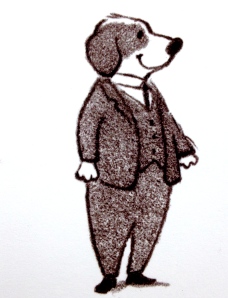 I needed to know what Dixie looks like expressing a range of different moods.

I also find that a character only really comes alive in context.
Enter his best pal Percy,

and his arch-enemy Lou Ella.

And we ALL know that we are what we love. So once I had invented the character of Dixie’s beloved car (oh yes – cars have characters too) I reckoned I had earned a little play with my paint box!