THE SEVEN DEADLY SINS (AND HOW THEY APPLY TO *YOU*!!!)

I have fallen prey to all but one of these at some point or other, but have somehow survived to tell the tale à la Dante. Learn from my mistakes…

Does the above sound familiar? (Good. Glad it’s not just me…) One day the person offering criticism could be your agent or editor. Best to practise anger management now when dealing with the people who love you enough to tell the truth. (Besides, we all know you only get angry when you agree with what they’re saying.)

Don’t automatically go for the agent with the biggest deals on Publishers Marketplace, because:

a) not every deal is announced

b) the biggest deal isn’t always the best

On this blog, you’ve access to loads of authors who have agents – some big, famous agents and some small, lesser-known ones. Instead of sending queries to the agencies everyone’s heard of, why not ask the Allsorts who they chose and why. (Start by asking me, I’m friendly.)

Further to this, if you’re lucky enough to have several publishers offer for your book, remember: the best editors don’t necessarily have the biggest budgets. If you’ve the right agent, they’ll help you choose what’s best for your career, not necessarily your bank balance. It’s about playing the long game.

The difference between a good book and a great one is an energetic self-edit. No cutting corners, no skim-reading the bit you think is probably fine, no fudging the timeline, no leaving that awkward metaphor or tedious cliché. Push yourself harder. The greater your book, the greater the reaction you’ll get from the reader. 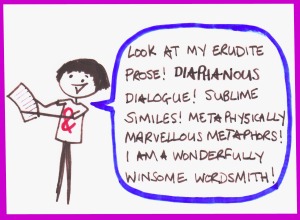 There’s a sentence in my book that’s been there from first draft to copy edit. The scene’s been re-written several times, but the sentence hasn’t because I’m so pleased with the image it conjures. The copy editor has wiggly underlined it and written ‘OTT?’ in the margin. Don’t be so proud of your own words that you can’t see how pretentious they sound. (And be eternally grateful when someone pulls you up on it.)

Er, don’t have sex when you’re meant to be writing.

There’s only so much Marmite on toast/chocolate digestives/salami straight from the packet that’s healthy to eat in a day. Seriously, I am actually giving sensible dietary advice here: eat a MASSIVE low/no carb, high protein meal and keep a bottle of water on your desk.

Scouring the Bookseller for deal announcements. Googling prize longlists. Reading glowing reviews. Of course I could be pious and say ‘Don’t do it!’, but who doesn’t? The key here is to remember that other people’s success doesn’t preclude your own. That ball of jealousy glowing so green it’s making you radioactive is very useful for fuelling your writing efforts and keeping you focused. This time next year it could be your book announcement you’re reading…

After playing with glitter, stickers and short sentences in the non-fiction side of Usborne Publishing (where they insisted on using her real name ‘Leonie’) Non Pratt moved to fiction as Commissioning Editor at Catnip Publishing, still playing with sentences, but not so much with the glitter and stickers.

She’s written a book called TROUBLE that will be published in March 2014 by Walker Books in the UK, and later in the year by Simon and Schuster in the US. Non is currently enjoying having someone else tell her what to do with her sentences.