Today I’m lucky enough to be interviewing author Amy McCulloch, whose debut novel, The Oathbreaker’s Shadow, is just out from Random House.  Amy somehow manages to squeeze her writing in around her job as Commissioning Editor at a leading UK fantasy imprint, so she knew what she was up against when she decided to set her novel in a dark and dangerous world, where words are every bit as dangerous as swords. 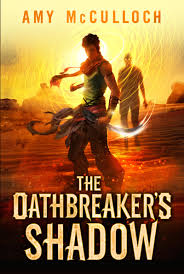 Fifteen-year-old Raim lives in a world where you tie a knot for every promise that you make. Break that promise and you are scarred for life, and cast out into the desert.

Raim has worn a simple knot around his wrist for as long as he can remember. No one knows where it came from, and which promise of his it symbolises, but he barely thinks about it at all – not since becoming the most promising young fighter ever to train for the elite Yun guard. But on the most important day of his life, when he binds his life to his best friend (and future king) Khareh, the string bursts into flames and sears a dark mark into his skin.  Scarred now as an oath-breaker, Raim has two options: run, or be killed.

Hi Amy.  You must be very excited about the upcoming publication of The Oathbreaker’s Shadow.  I was hoping that, as your interviewer, I might get a sneaky peek before the publication but no-one wanted to part with their advance copy!  I had to make do with the sample on Random House’s website and I’m itching to read more.

1. Can you tell me a bit about your journey to publication?

My journey to publication was quite long – it began seven years ago, while I was still at uni. That’s when I finished the first draft of the manuscript and immediately started querying. In hindsight, that was a big mistake. A trip around the world, a few years and several manuscript revisions later, I got back to querying properly. It still wasn’t an easy process but three months of querying led me to sign up with my amazing agent, Juliet Mushens. I did another round of revisions for her, and we sold the book to Random House UK pretty quickly after going out on submission, so that was a relief! It was then another 18 months from deal to publication day. So writers, be prepared to be in this for the very long haul!

2. It’s a fascinating premise – the idea that if you break a vow your betrayal is seared into your flesh forever.  What led you to write the book?

Studying! I took predominantly English courses at Uni, with a bit of History thrown in there as well. I became really interested in this concept of fealty (a pledge of allegiance from one person to another) that seemed to be common in medieval societies as far flung as Britain, Mongolia and Japan. I suddenly wondered what an oath could mean in a fantasy society – could there be a physical consequence for breaking an oath? Or something even worse? From there, I just knew I had to write about this world.

3.  How long did it take you to go from first draft to finished manuscript?

Well, it’s about taken about six years from first writing ‘The End’ to seeing it in print. It seems like an age, but the manuscript went through several revisions during that period – much needed revisions, I might add. One was a total rewrite!

4.  How would you describe your perfect writing day?

Waking up at my cottage in Southern Ontario, Canada, a wicked thunderstorm raging (so I’m not tempted to go outside), a hot mug of tea and absolutely no one about.

5.  …And how would you describe your actual writing day?

Fret about not having any time to write, head to Starbucks, grab a muffin and caramel macchiato, sit in a chair, check Twitter, daydream about writing, come home, realize I haven’t written a word and scramble to fit in my 800-word minimum before bed!

6.  There seems to be a rich variety of cultural influences in the narrative.  What inspires you?

I’m really lucky to have grown up in a household that had a variety of cultural influences – my mum is Chinese, my dad is English and they own their own oriental carpet store, which means frequent trips to India, Pakistan and Iran. I am particularly inspired by how different cultures throughout history have shared stories: through cave paintings, poetry, song, carpet-weaving, books, theatre… a lot of what I find out is pilfered ruthlessly for my novels.

7.  Who are your favourite writers/books?

8.  What are your favourite films/TV programmes?

I’m currently loving Game of Thrones! I also have a huge soft spot for crime shows like Elementary and Criminal Minds. In terms of films… well, I’m a huge Lord of the Rings fan (I went on the tour in New Zealand!) and I have a secret (not so secret now!) love of the film S1m0ne with Al Pacino. I have no idea why.

9.  What advice would you give people reading this blog who want to get published?

I’m going to give you the hardest type of advice: the advice I know no one wants to hear. And that is… don’t rush.  Whether you’re looking for an agent or working on self-publishing your book, don’t put it out there until you’re really ready to let it go. Trust me, when your book is finally out there, you’ll be grateful for every millisecond you put in to the book. My publication journey has taken 7 years – which is not a particularly long time, I might add! – and sometimes (*cough* every day *cough*) I wish I had had even more time. Yes, you have to let go – but don’t be so keen to put your work out there that you don’t put an effort you can be proud of.

One dreaded word: sequel! I’m finishing up the second book in my contract (the second part to the The Oathbreaker’s Shadow duology). It’s so strange to be wrapping up this story, but I’m very excited for readers to find out what finally happens to Raim.

Thank so much, Amy, and the very best of luck for June 6th.  I’ll be first in the queue to find out just how Raim got that mysterious knotted bracelet…

Amy McCulloch was born in Kingston-upon-Thames, UK, and moved to Ottawa, Canada, when she was 11. She attended Immaculata High School, where she developed a love of geeky things like science fairs, yearbook, RPGs and The Lord of the Rings. After high school she started studying at the University of Toronto, where she graduated with a B.A. (Hons) in English, specializing in Old English and Medieval literature (her love for Geoffrey Chaucer will never die).

After a year out backpacking around Africa, Australia, New Zealand and South-East Asia, she moved back to London, UK, to find a job in publishing. She now works as commissioning editor for HarperVoyager, where she works on such amazing authors as George R.R. Martin, Robin Hobb and Raymond Feist, and edits brilliant new stars of SF & Fantasy like Blake Charlton, James Smythe and Janet Edwards.

At the beginning of 2011, she signed with the amazing Juliet Mushens of The Agency Group for her debut YA fantasy-adventure novel The Oathbreaker’s Shadow. Random House Children’s Books is out today!

Sarah Naughton is the author of The Hanged Man Rises, a supernatural Victorian thriller for teenagers.  Her second book, The Blood List, is due out February 2014.

This entry was posted on June 6, 2013 by emmapass and tagged Amy McCulloch, Book Birthday, Fantasy, Sarah Naughton, the oathbreaker's shadow.