Kids have the best ideas

The best ideas come from little minds. The smaller you are, the better your creativity so sidle up to your youngest relative or if you are blessed with youth, make sure to note down your ideas. Kids say the funniest things. It is so true, and they also happen to say the most interesting too.

Just recently I’ve been keeping an ear constantly cocked in the direction of the younger members of my family, waiting for their genius to strike. I carry a pen and notepad around with me because you never know when they’ll come out with a corker.

The other day I was at Tesco with my second cousin who is four and I caught her with her finger lodged up her nose to the knuckle.

She looked at me reproachfully.

‘I can’t help it if there are bogies up there.’

She had a point.

Later that day, we went back to her house and I was lumped with the task of entertaining her before dinner. I tried distracting her with the normal items: teddy bears, barbies, dominos, the CBeebies channel, but nothing was working.

‘How about I tell you a story?’ I said, reaching towards a stack of picture books.

This seemed to interest her.

‘—walked around on her head with knickers that made her fly.’

I blinked at her.

‘And where did she live?’ I asked, taking out my notepad.

‘On a mountain. In the moon. And she eats cheese all the time so she smells.’

I was scribbling madly, but before I could ask her anymore, she was called to dinner. When I tried to bring it up later she gave me a puzzled look before whacking me with a Barbie, but I didn’t care – I had harvested her genius.

I relayed this episode to a friend and she told me that her niece came out with the strangest little stories. When I asked if she could remember any she laughed as if the idea of noting down these quirky tales was absurd, and I thought that that was such a shame.

My parents always encouraged me to write down my stories when I was little. One of these was a strange account of a daffodil that caught a cold over winter, leaving red dots all over his yellow flower in the spring. I still have the original piece of A4 that it was written on (complete with dodgy illustrations in thick felt tips) and when I was coming up with ideas for a picture book before Christmas, I dug it out.

Luckily, a publisher liked the wacky tale penned by my eight-year-old self and The Spotty Dotty Daffodil will be published by Skypony Press in spring 2014. The story has been altered and the illustrations *cough* destroyed, to be replaced with the beautiful artwork of Bethany Straker, but the idea is still fundamentally the same.

If I hadn’t been encouraged to note down my weird little story as an eight-year-old, then The Spotty Dotty Daffodil wouldn’t exist. Therefore I’m going to keep writing down the strange tales my second cousin comes out with and encourage her to come up with more. When she’s eighteen, I’ll hand over a notebook full of her genius and maybe she’ll want to write a picture book about a princess with flying knickers. 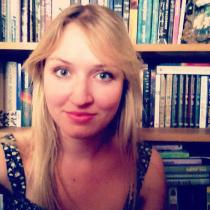 Rose Mannering is an English writer and international author. She signed up with literary agency, Creative Authors, when she was eighteen and secured her first UK publishing deal when she was nineteen. Her YA fantasy novel, Roses will be out on Nov 6th and her first picture book with illustrator, Bethany Straker, will be released in spring 2014.

5 comments on “Kids have the best ideas”